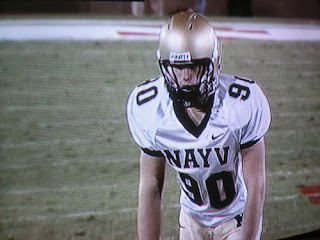 As a rule of thumb, the longer the word, the less glaring the spelling error. Misspell, say, colloquialism, and folks might not even notice. Butcher a four-letter word, however, and like an active submarine, you’ll be in deep water.

An error of such magnitude occurred Sept. 16, 2006. In a football game that day, Navy defeated Stanford 37-9. Late in the game, with the Midshipmen firmly in front, Navy’s coach sent in his backup kicker, Matthew Harmon, to attempt a 30-yard field goal.

Harmon, a sophomore, did his job, making his first collegiate field goal, but whoever made his uniform Navy blew it. The right letters were on active duty, but like an ensign swearing at an admiral, they were out of order.

Navy would have been wise to enlist an editor. What am I saying? No need to hire professional help. A 10-year-old could have told the team that NAYV, even though it sort of works if you sound it out, is a rank spelling.

In basketball, turnovers often result in points for the opposition. In this newspaper blurb, “GOOD TURNOVERS” leads me to a single point, one I learned long ago: We only need only once. 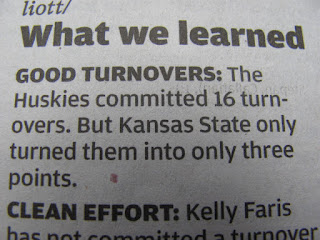 Can we drop one only faster than pants in a proctologist’s office? 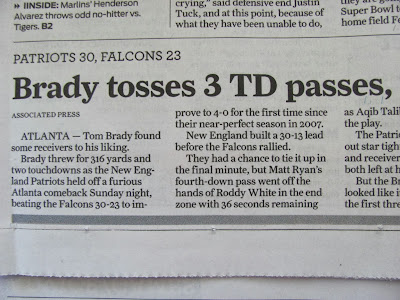 Allow me to briefly set the scene. It’s a Sunday. We’re in a busy newspaper office, less than 30 minutes before the paper goes to press. A couple of writers are at a small, cluttered desk. One is seated; the other is standing. And … go!


AP reporter: Hey, man, I finished my article on the Pats-Falcons game. The key elements to consider when you write the headline are New England’s victory and Brady’s two scores.

Headline writer: Patriots won the game, and Brady threw two touchdowns. Got it.

APR: Do you? I don’t mean to be a jerk, but you have written some head-scratching headlines in the past. The ones that stand out are

I hate to bring those up, but I’m a stickler for accuracy, and I’d prefer to avoid any unintentional humor.

HW: Wow! Way to dredge up the past, man. Stop worrying. I’ll write a headline that makes it clear New England won the game and Brady was the catalyst, with his two TDs.

APR: Great. Thanks. If you come up with something compelling, it’ll draw more readers. Try using the active voice. Strong verbs are a must.

HW: Hey, give me some credit. I know how to write a headline. It’s a skill, and I possess that skill. I am an ar-teest.

APR: Sorry, didn’t mean to insinuate otherwise. I’m sure you’ll come up with something catchy. Speaking of catches, two New England receivers caught passes in the end zone from Brady. How ‘bout “Brady throws 2 TDs in Patriots’ victory over Falcons”? That’d be a pretty good headline.

HW: Not bad. I’ll consider it. I do like how it includes the vital information.

APR: Yeah. All headlines should grab readers’ attention. They should be simple, direct and, most important, accurate.

HW: So true. We’d look really silly, for example, if we spelled Brady’s name incorrectly or stated that Atlanta won or mistakenly credited Brady with an extra TD.

APR: Tell me about it. That’s not a concern for us though. The first two sentences of my article clearly present the correct spelling of Brady, the winner of the game and Brady’s total touchdowns. Let that be your guide.

APR: We do. You know, I’ve been thinking about it, and you really should try to work in Brady’s TD total. He is the headliner, after all. As you know, he threw two. If you think you might forget, I have an easy way to remember. Pretend you’re a football team down eight in the final minute and you’ve just scored a touchdown. What do you do? You go for 2.

HW: Thanks for the suggestion. I won’t need any sort of mnemonic device though. I know he scored three TDs.

APR: No. He scored two, not three.

Allow me to briefly set the scene. We’re in the same newspaper office, early the following day. The same two writers are stationed around the same small desk. And … go!

HW: Our paper made the headlines last night.

APR: Yeah, Owen told me. Give Brady one extra touchdown pass and the world wants to pass judgment.

HW: Well, our paper does strive for accuracy. We blew it. Have to move on. So, what do you think of this headline for tomorrow’s paper: “Writer tosses accuracy aside, headline uses ‘3’”?

APR: Not bad. Could go in that direction, or we could use “Brady credited with extra TD, writer embarrassed.”

HW: Appropriate. I am embarrassed by yesterday’s headline.

APR: That makes three of us.

Eight Is Not Enough 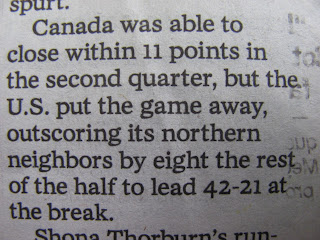 Scorekeeper, we have a problem. If you close to within 11 points and then get outscored by eight, you trail by 19 points. (It’s a simple calculation: 11+8=19) Yet the score is 42-21, which is a 21-point deficit. To settle this international dispute, we need to hang 10 on the sixth line.
Posted by Owen at 8:00 AM No comments:

In the 2013 teen sex comedy The To Do List, Aubrey Plaza plays Brandy Klark, who makes a list of college objectives to be ticked. I’m ticked about her list — and about the movie title it mimics. 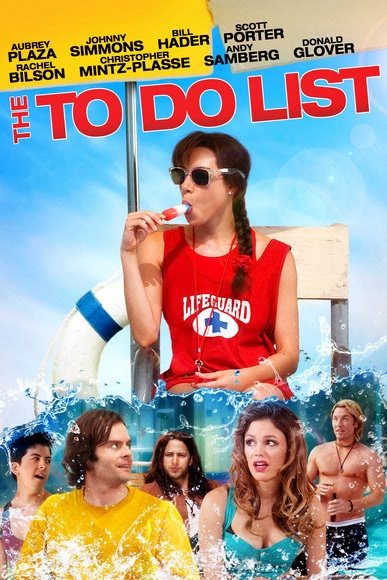 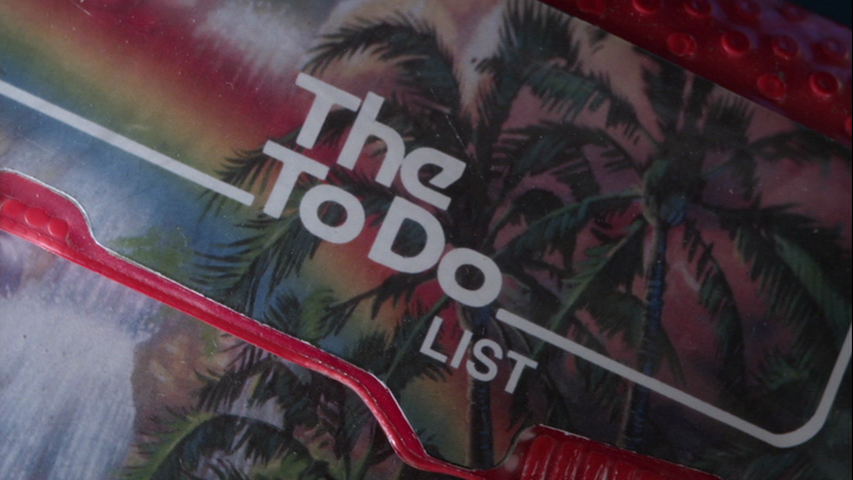 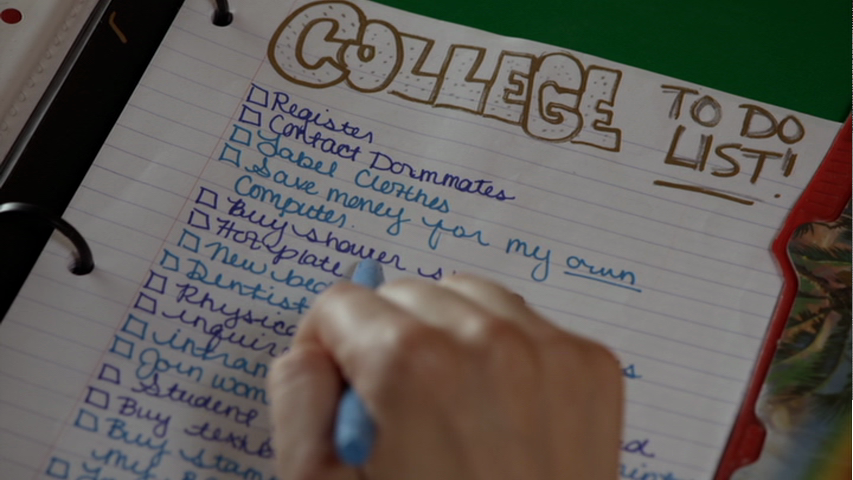 Allow me to assist Brandy, a valedictorian who should have known something was missed in her list. I’ll insert a hyphen and — ta-da — ugly The To Do List turns into beautiful The To-Do List.

A man eating shark attacked a surfer in Australia.

The small business owner applied for a loan.

As written, the subject of the first sentence is a man dining on shark meat. The second sentence is about a business owner who is not big.

After inserting hyphens, however, we get the following:

A man-eating shark attacked a surfer in Australia.

The small-business owner applied for a loan.

Now it’s clear that a shark attacked a surfer, and that the owner of a small business applied for a loan. The hyphens show that man-eating and small-business express single concepts.

Let’s revisit the title of the film. To modifies do, and together they form a single adjective modifying the noun list. It’s not a “to list”; it’s not a “do list.” It’s a “to-do list.” To make sense, to and do must work closely. The hyphen connects them.

Some may argue that omitting the hyphen causes no ambiguity — that the meaning is understood with or without it. I disagree. I’m a hyphen fan. (A hyphenatic?) In this instance, to and do must be read as a unit to have meaning, and the hyphen allows for a “smoother” read. The lack of a hyphen could momentarily impair readability, causing a person to backtrack to make sense of what he’s just read. Critics claim hyphens are overused in compound modifiers before a noun. I believe such hyphens will never inhibit clarity, but their absence could result in confusion. How, then, can including one on a “to-do list” be a bad thing to do?

Exceptions exist, of course. Two-word noun phrases that are familiar as a single term are usually written sans hyphens.  Examples include:

Without hyphens, meaning remains clear. Nobody would misread those four compound modifiers. That is why a high school student can be in a high-speed chase.

Of all the punctuation marks, the hyphen seems to have the fewest standards. Its use is often a matter of taste, of style. I prefer to avoid any perceived ambiguity, so more hyphens are my style. Disagree? We can have a last-minute discussion about this hot-button issue. We can’t, however, have a last minute discussion about this hot button issue.

I apologize for making such a big to-do about hyphens. It’s time to proceed with a laundry list of additional complaints about a certain movie lacking a hyphen. The To Do List establishes Brandy’s strong academic pedigree by showing one award after the other during the opening credits. Well, next on my to-do list is to add a letter to her 1985 certificate. EXCELENCE would excel with an additional L. 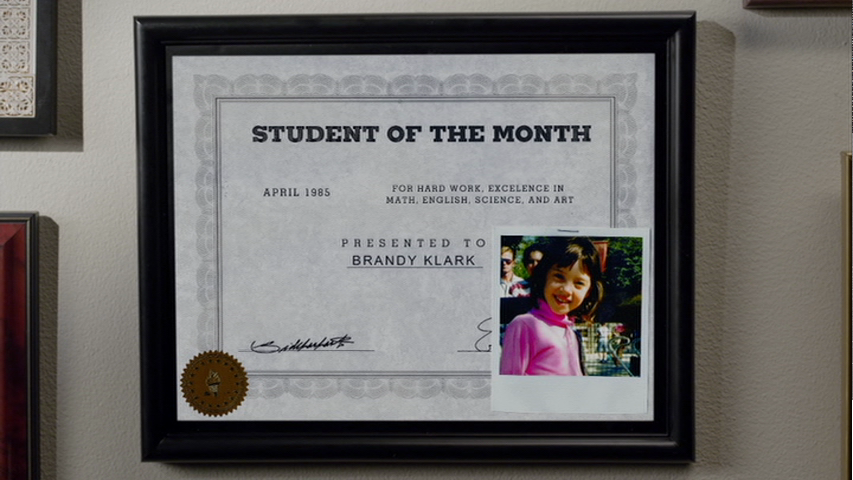 I have to repeat the previous task, because the same error pops up on a subsequent certificate, and I’m committed to EXCELLENCE.

The 1989 certificate, it turns out, excels at misspellings. It hasn’t achieved EXCELLENCE ... or ACHIEVED. What’s with the aggrieved ACHIEVED? I should see I before E, except that’s not what I see. 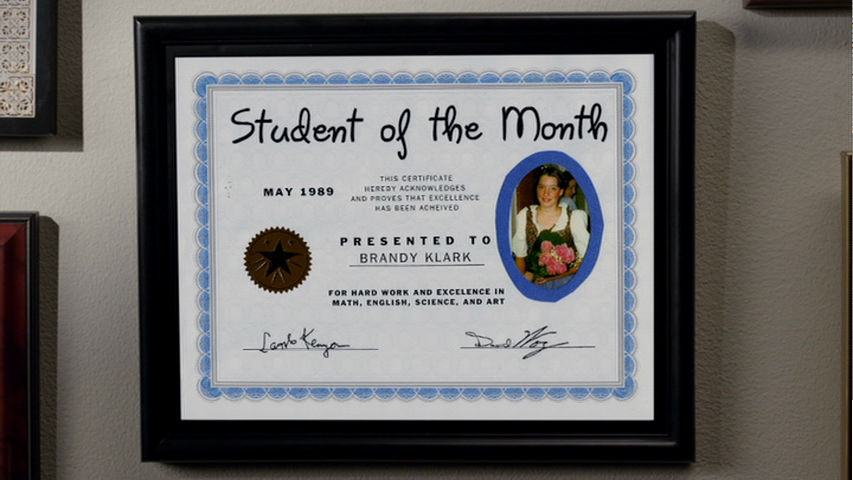 The final entry on my to-do list is to fix ACHEIVEMENT. Transpose the second and third vowels and, just like that, we have reached an ACHIEVEMENT. That’s quite a feat. 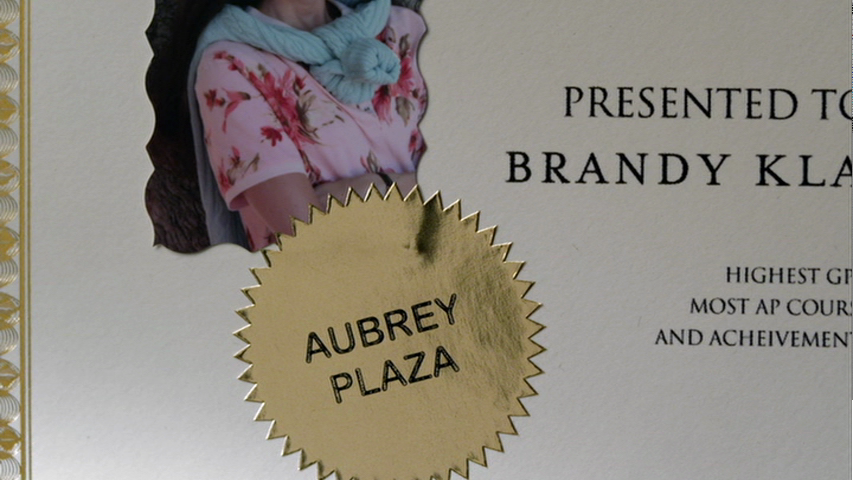 All our tasks have been accomplished. √

Anybody out there like me? When composing to-do lists, I sometimes include simple tasks just for the ensuing satisfaction. This, for example, is what one of last week’s lists looked like before I attacked it: 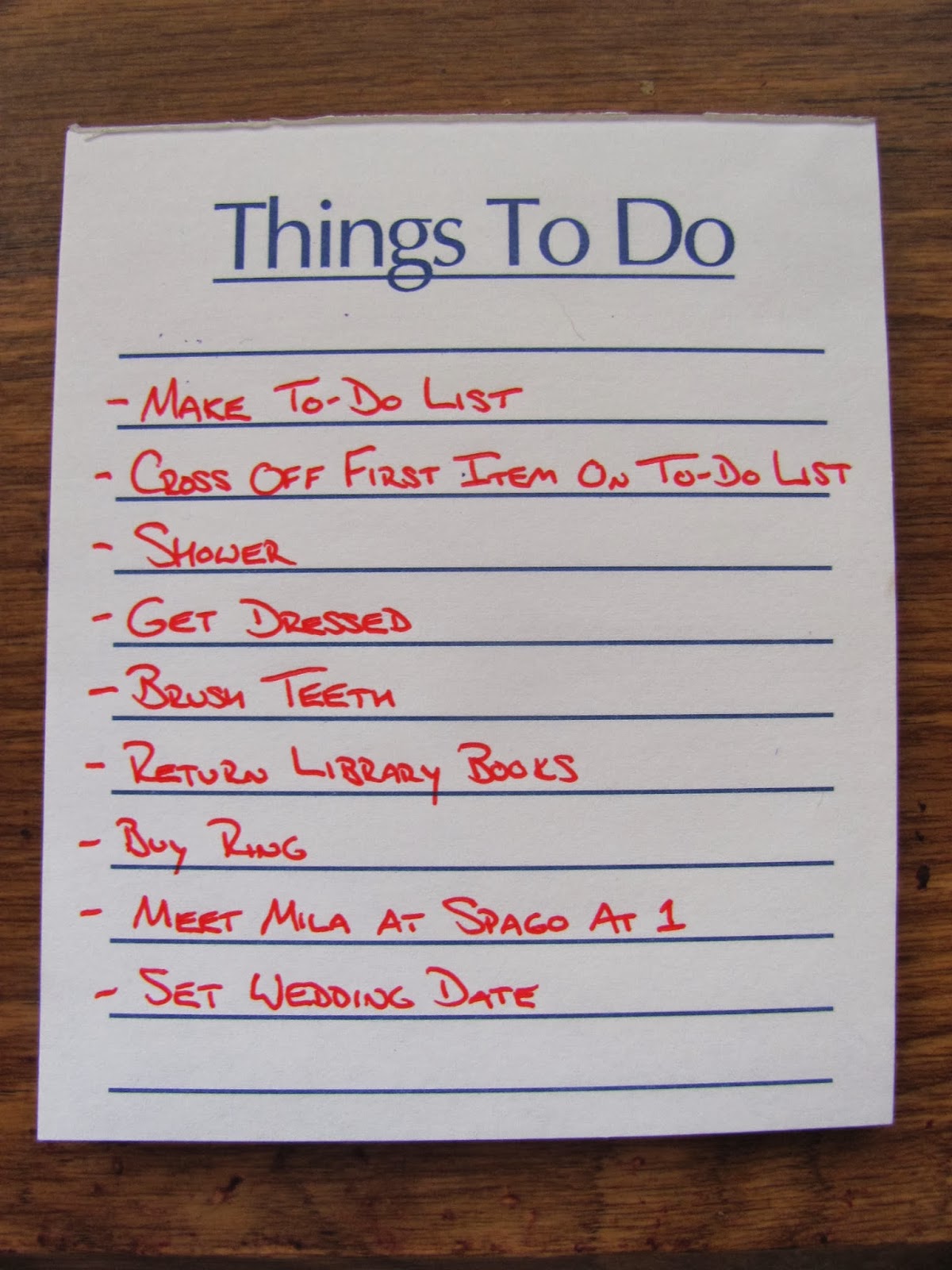 By 10 a.m. I had already crossed off the first six items. I had accomplished so much so soon!
Posted by Owen at 8:00 AM No comments:

The National Football League, a multibillion-dollar petri dish for domestic violence cases and CTE concerns and nickname controversies, may be flawed, but it isn’t the only LEAGUE in need of remedy. 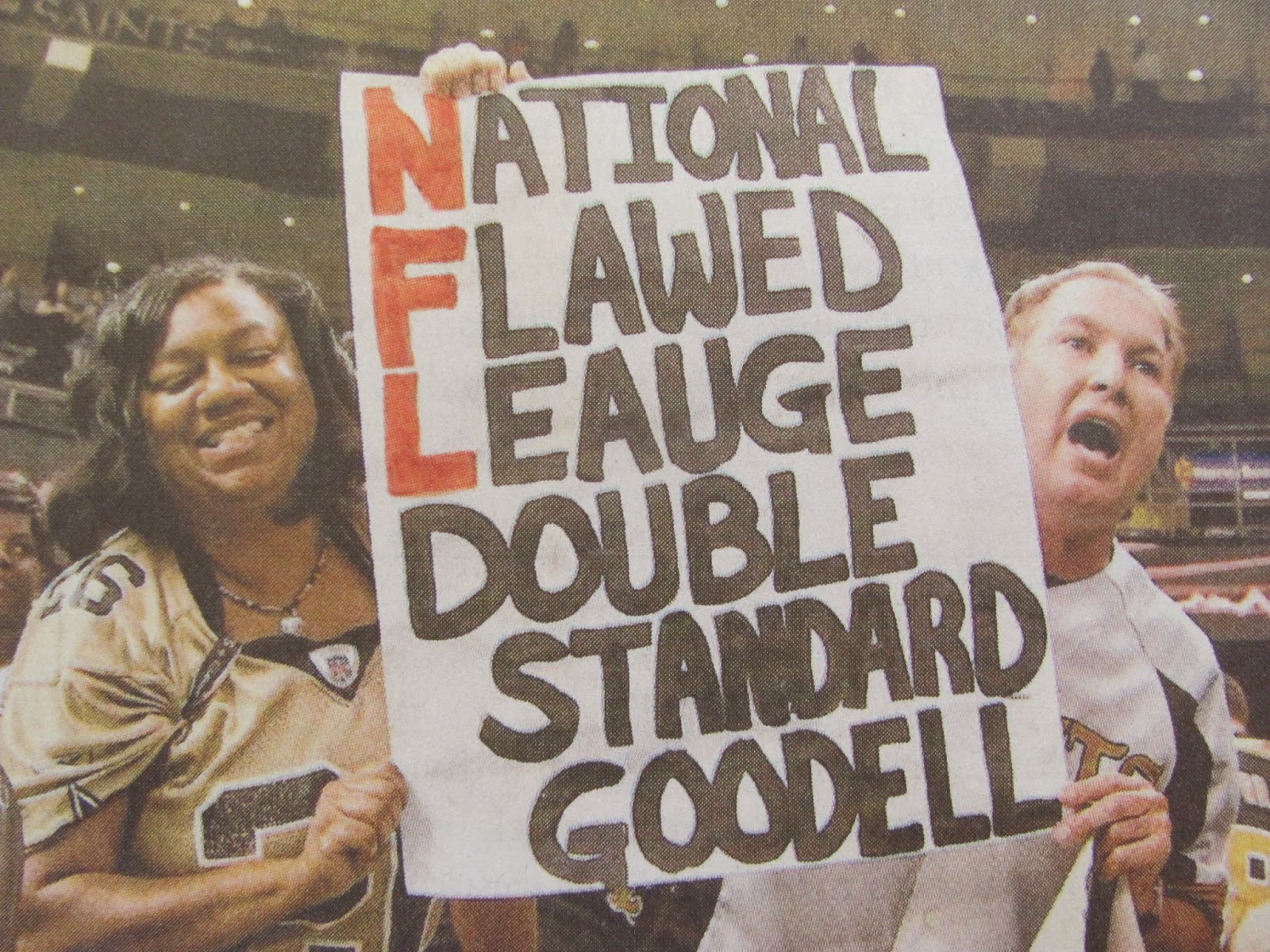 The pictured NFL sign, which contains a FLAWED and a flaw, needs fixed lettering. Its third word kicks off with a Goodell … er, a good L. E and A play nicely, too. The trouble begins with U, which cut in front of G the way a cornerback jumps a pass route. U, like forces, strings or spots, goes after the G. 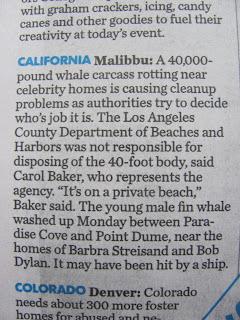 B’s abound in Malibu, an enclave for well-heeled individuals west of Los Angeles. But only one B inhabits Malibu. Usually. Somehow, an extra one has washed up at the intersection of B and U. This was not meant “two B.” We’re witnessing a rare case of Malibu malformation, and I need to do a whale of a job coming up with a solution. What to do? What … to … do?

I’ve got it! Hand me that khaki-colored uniform and broad-brimmed hat. We’re in Malibu, near the Pacific Coast Highway, so I’m going to pose as a California Highway Patrol officer and let the CHiPs fall where they may. Here I go. Don’t blow my cover.

[Slowly removing my shades and assuming my best Erik Estrada impersonation] Do you realize how vast you were going? You went above the keyed limit … by one letter. That’s a minor graphic violation. I’ll let you go with a warning if you promise to get back on the PCH, leave Malibu and immediately dispose of that second B. Haul its carcass out of here. It’s like an inexpensive beachfront home — it doesn’t belong in the ‘Bu.
Posted by Owen at 8:00 AM No comments: