Spend a summer day on a beach on either coast and you’re apt to come across a sand-sculpting contest. Inevitably, someone will be crafting a sandcastle or some form of sandanimal. Not my style. Too predictable. Too trite. If I were a contestant, I’d create a granulated-rocks version of Samantha Stephens. Or Hermione Granger. Or one of the Charmed sisters. Or Glinda. Or Glinda’s green-skinned counterpart — the one with a legion of flying primates at her disposal. My masterpiece, upon completion, would blow away the judges. My sedimentary sculpture would be a sentimental favorite. Soon, judges and beachgoers would be hungering for more of my tasty sandwitches.

Sandwitches exist, if only on beaches. So too, of course, do sandwiches, which are a lunch staple. (The term sandwich traces its roots back to 18th-century Englishman John Montagu, 4th Earl of Sandwich.) But sandwhiches? Hmm…

My friend Lindsay, of IAMNOTASTALKER, brought this image to my attention, and it provided food for thought. Kime Buzzelli, a costume designer for the TV show 90210, posted the picture on Instagram after seeing the sign in a Subway window in Yucca Valley, California. (Buzzelli is an artist who has exhibited her paintings in galleries across the country and in Tokyo. You can visit her official website here.)

The artisan who attempted to make sandwiches failed miserably. Why did the writer sandwich an h between the w and the i in that $5 footlong?

The sign has been which doctored, and the only remedy is to knock out the sixth letter of the penultimate word — with a knuckle sandwich, naturally. If I have my say, that h is toast, notwithstanding certain small-appliance inoperability.

FebruANY® way you slice it, Subway, it’s sandwich. SANDWICH! I’m sorry, but using all caps is how, in writing (and without wafer-ing), I scream sandwich.
Posted by Owen at 8:00 AM 2 comments:

Writing about ABC’s reality series The Bachelor, a show I’ve never watched nor ever will, is virgin territory for me, but I can no longer abstain. My friend Lindsay, of IAMNOTASTALKER, introduced me to today’s inaccuracy, and I’m going to go all the way with it.

Virginity, once lost, cannot be found. It lies not between couch cushions or in a hotel-room closet. It’s gone forever, like $2 gas, Yugoslavia and your youth.

If you’ve had sex and then vow to abstain until marriage, you are, in Madonna vernacular, like a virgin. You’re like a virgin — not a virgin. The not-so-subtle difference? You’ve had intercourse, of course! 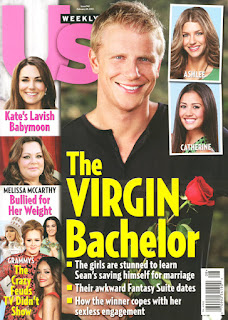 The cover of the Feb. 25 issue of Us Weekly fails to make this distinction. Sean Lowe, the so-called “virgin bachelor,” had sex in college, as you can see in the excerpt below. Ipso facto, he is as virginal as the aforementioned Material Girl.

That’s right: He made whoopee.

Sean is no virgin. He’s as pure as yellow snow. I’m not judging his sexual past or his present lifestyle choices. I am, however, judging the misleading, bewildering word choice. Sean has, pardon the slang, gotten it on, so Us Weekly needs to get it off. Remove virgin from the cover. Replace it with celibate or abstinent and I’ll refrain from further commentary the way a post-collegiate Sean refrains from sex.

My Bachelor decree doesn’t end there. The “born-again virgin” description within the Us Weekly article is a head-scratcher too. A person labeled born-again is one who has returned to an activity or conviction, such as a born-again Christian or a born-again conservative. Lacking a tricked-out DeLorean, one who “did have sex in college” cannot return to an area unaltered by human activity — virgin territory. In simplest terms, once you get a woman in the sack, you can never go back. 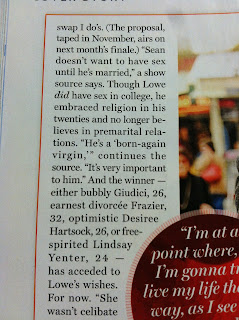 Allow me to consummate today’s post by urging everyone to tune in to ABC tonight at 8/7c. I hear the “virgin bachelor” is heading to Thailand for a few romantic dates that may or may not wind up in a resort’s “fantasy suite.” If you’re expecting a carnal conclusion, however, forget it. The 29-year-old Texan won’t be knocking cowboy boots.
Posted by Owen at 8:00 AM 1 comment:

The Cost of Poor Editing 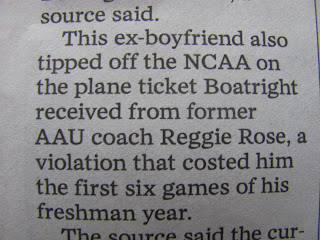 The past tense of regular verbs is formed by adding -d or -ed. Hate (present tense) becomes hated (past tense), alter becomes altered, discombobulate becomes discombobulated. You get the picture. Verbs that do not end in -ed in the past tense are classified as irregular. Write (present tense) becomes wrote (past tense), tell becomes told and so on. The verb cost, meaning "to have a price of" or "to cause to lose something," is irregular. Its past tense is not costed; it's cost.

Make sure you read your work closely before it's published. If you don't, it may cost you.
Posted by Owen at 8:00 AM No comments:

The "Best Writer" Award Goes to... 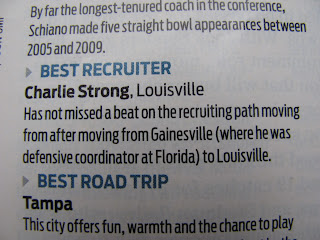 What Are You Wearing, "Bee" Reader?

Well, if you’re The Sacramento Bee, potential subscribers who aren’t looking for, um, a call of the wild. 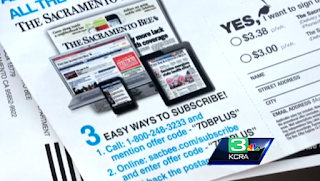 As first reported by KCRA, a local NBC affiliate, the Bee recently sent a mailer containing the following phone number: 800-248-3233. Go ahead, give the Bee a buzz … and prepare yourself for an exciting, enticing offer.

Guys, hot ladies are waiting to talk to you!

Hang up! Hang up now! You have the wrong number. That’s not customer service. Well, it serves customers, but a clientele more interested in the birds and the bees than the Bee. You see, 800-248-3233 is an adult chat line.

Someone in Sacramento failed to pay attention to Bee-tails. A simple oversight resulted in the transposition of two numbers. If you’re on the hunt for a limited-time, discounted newspaper offer, the second 8 can’t wait; it goes before the 4. The actual Bee subscriber hotline, as seen below on a different mailer, is 800-284-3233. 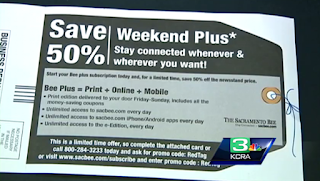 Newspaper subscriptions often come with perks (exclusive access to online content, special editions, free calendars and so forth), but the “something extra” services offered when dialing the 248 number wouldn’t give most would-be Bee subscribers a happy ending. 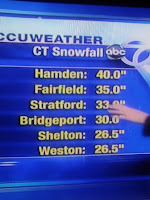 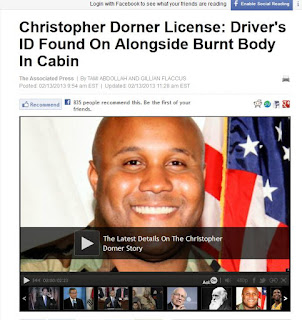 Turns out, an extra preposition adorned this Dorner headline. His license was found on his body, or alongside his body, not “on alongside” his body. Take on off, or restrain the nine-letter a-word at large alongside it. Burn one or the other, and place it in a body bag. We’re better off without it.
Posted by Owen at 8:00 AM No comments:

My brother was reading an article on CareerBuilder's website titled "30 jobs that pay $30 per hour," and something didn't compute, so he sent a link my way. Thanks, Paul!

Anthropologists, with an hourly wage of $30.81, topped the list. Here is a sampling of other careers listed: 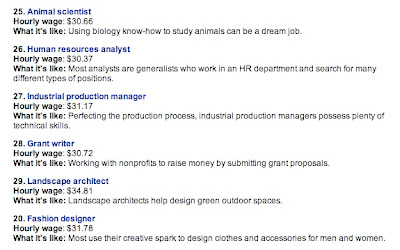 Can we hire No. 16? Someone has committed a petty crime. Why is the final entry in the list, "fashion designer," numbered 20? It's right there in the title: 30 jobs. Twenty-eight, twenty-nine, thirty. Any No. 9 math whiz or number-crunching No. 12 knows that.

I wonder if CareerBuilder would pay me $30 an hour to make sure all its numbered lists are in order, literally and figuratively. The website could count on me. That task would be as easy as 1, 2, 4.
Posted by Owen at 8:00 AM No comments:

So, imagine my surprise when, years ago, I found an error in the edition published in 2002. On page 183, in the "off-, -off" entry, the stylebook lists "some commonly used combinations with a hyphen," including off-season. Flip ahead to the Sports Guidelines on page 298, however, and you'll notice the following entry: "offseason (no hyphen)."

That error is the source of continuous, er, continual amusement.
Posted by Owen at 8:00 AM No comments: 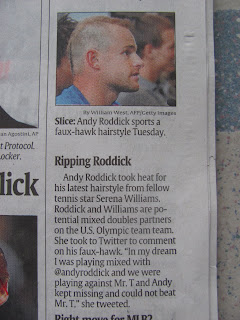 While toiling at the keyboard, I burned and bubbled over the fact that I found a double team. That's trouble — worse than a bad hair day, even. I've heard of doubles teams in tennis, but this particular "double-team" effort in USA Today doesn't cut it. 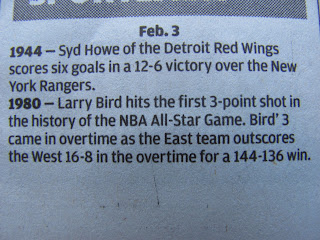 Oh, have you not heard? To quote Peter Griffin, whose avian antics you can witness here, there seems to be an absence of a certain ornithological piece. In short, a bird has had its wings clipped.

On Feb. 3, 1980, Boston Celtics sharpshooter Larry Bird hit the first 3-pointer in an NBA All-Star Game. In this newspaper blurb, "Bird's 3" has become "Bird' 3." What happened to the s? It flew the coop, I guess.

I'm not finished. Allow me to kill two birds with one stone.

That very same sentence has me tense for another reason. The writer has forsaken consistency by opening with a past-tense verb, came, and closing with a present-tense verb, outscores. The timing of the action in that sentence does not demand a switch in tense. The writer would be wise as an owl to change came to comes.

Time for me to fly. 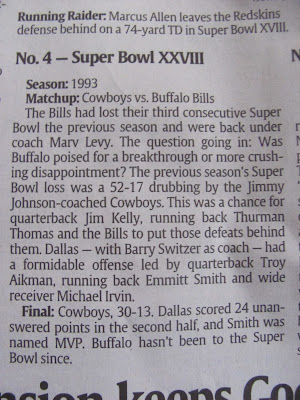 In a rundown of the 10 most hyped Super Bowls, USA Today put Super Bowl XXVIII, in which Dallas defeated Buffalo 30-13 behind an MVP performance by Emmitt Smith, at No. 4. Dallas' coach, according to the article, was Barry Switzer. That's B.S., because it wasn't B.S. It was J.J. The Cowboys' coach in 1993 was Jimmy Johnson. Switzer's lone Super Bowl title came two seasons later, in a 27-17 Dallas victory over Pittsburgh. That also happens to be the last time the Cowboys were relevant on the gridiron — and that's no bull.