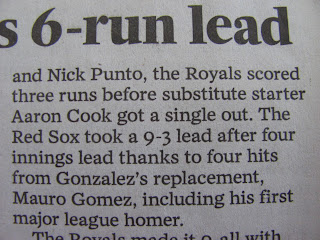 Get the lead out. The second one. The lead lead can stay.
Posted by Owen at 8:00 AM No comments:

Welcome to the 2014 When Write Is Wrong National Spelling Bee.

Your first-round word is bee.

Do I have to spell it out for you?
Yes, I thought that was clear.

May I have the language of origin, please?
A bee originates as an egg in a nest or hive. Oh, wrong bee, wrong origin! Bee is possibly from an Old English word bēn, meaning prayer, or the Modern English word boon, meaning benefit or favor.

May I have the definition, please?
You’re in luck. I’ve got a dictionary on me. A bee is a gathering of people for a specific purpose.

Are there any alternate pronunciations?
Nope.

Can you use it in a sentence?
Sure. Bee is a word. What? Not helpful? Try this sentence: She planned to have lunch before attending the quilting bee.

In February, after four hours and 66 rounds, a Kansas City spelling bee was postponed when 11- and 13-year-old competitors exhausted all the words on the prepared list.

Organizers created a new set of approved words, and the regional bee resumed the following month. Twenty-nine rounds into the buzz-worthy competition, the 13-year-old, a seventh-grader, advanced to the 2014 Scripps National Spelling Bee, which takes place today and tomorrow in Washington, D.C., by correctly spelling definition.*

In its coverage of the bee that lasted a spell, Fox & Friends, an early-morning show on Fox News, committed the ironic faux pas shown below.

Before any Liberals jump at the chance to bash Fox News for its buzz cut, note that this bumbled bee colonized less than a week after the president, at a “Women of Soul” concert in the White House, misspelled respect during a tribute to Aretha Franklin.

“When Aretha first told us what R-S-P-E-C-T meant to her…” Obama said, stumbling on the spelling of the Queen of Soul’s 1967 female empowerment hit, much to the audience’s, ahem, bee-musement.

Dropping an e, it turns out, crosses political parties.

* I can’t recall my seventh-grade days with much clarity, but spelling definition seems a bit … easy, no? What words did the contestants have to spell in the early rounds? Hat? Try? Word? Free?
Posted by Owen at 8:00 AM No comments: 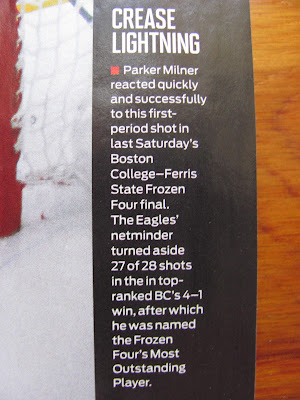 If his editing skills are as sharp as his goaltending skills, Parker Milner’s services could come in handy when editing this Sports Illustrated caption. Perhaps Milner could turn aside a couple of words that don’t belong.

Alas, Boston College’s netminder is busy stopping shots, so I’ll take a shot at it.

“In the” is in the way on the left wing. Like a hockey player at a ramshackle rink, a random word often skates on thin ice. But two words?

Let’s leave ‘em both out in the cold. That loss would be a net gain. 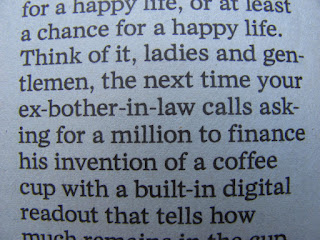 When it comes to relatives by marriage, the mother-in-law is most apt to be labeled bothersome, for her meddling, judgmental, demanding ways. It’s why mother-in-law jokes are as ubiquitous as those involving road-crossing chickens.

This time around, however, it’s her son who gets a bad rap. Oh, brother.

An r has been x-ed out of ex-brother-in-law. Could it be the author has residual issues with the guy his sister married? My advice: Don’t shun the r. Allow this particular black sheep to participate in the family reunion. You “kin” do it.

And if, in the future, someone attempts to convince you that brother can be spelled without an r, you know what to say:

Back in the summer of 2012, we witnessed a case of “a more.” Italians and non-Italians alike loved it, of course. They clamored for more.  It’s taken some time, but the wait is finally over. Ardor has returned, as fiery and strong as before, which is all the more reason to touch briefly on this topic — once more. 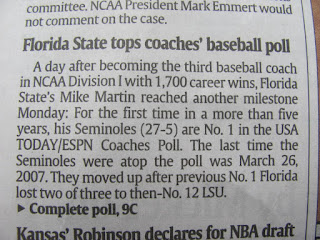 The wee word that makes an appearance six spots after the colon is doing more more harm than good.

This is how the sentence would look sans a:


For the first time in more than five years, his Seminoles (27-5)
are No. 1 in the USA TODAY/ESPN Coaches Poll.

Fill ’er up! This headline, which appeared on the front page of a USA Today Money section, has an efficiency deficiency. 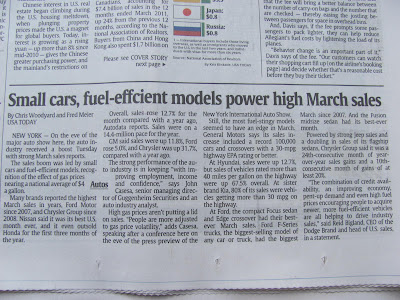 I’m no efficiency expert, but I can tell we’ve got a case of “addition by subtraction.” We’re minus an i in fuel-efficient. By subtracting one letter, the headline writer has added fuel to the fire.

A fuel-efficient car will, one hopes, be productive without waste. Isn’t it ironic, then, that haste made waste in this headline? I say we expand this “waste line.” Add an i. I’d be pumped.

Our bumpy road trip is over, readers. I’m out of gas. 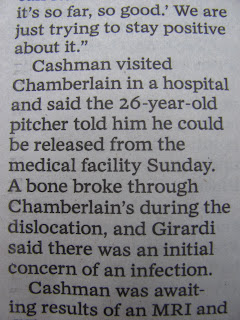 Oh, come on! Don’t be bashful! Show some skin.

L.A.: The City of Angles 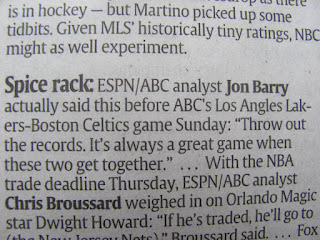 Los Angeles has a hole in the middle of it, and I’m not referring to the one in the giant doughnut that sits atop the landmark Randy’s Donuts building, a few blocks from LAX.

This particular hole looks bad from every angle. Something is askew. Angeles is missing its middle e, resulting in a city name off a degree. Do we have ourselves a right angle? Nope, it’s a wrong angle. Do we have “a cute” angle? No, it’s ugly. If anything, I’d say it’s obtuse. Ah, geometry-based humor!

So, did you enjoy today’s post? Did you? Can’t you tell I’m angling for compliments?
Posted by Owen at 8:00 AM No comments: