We "Have" a Problem 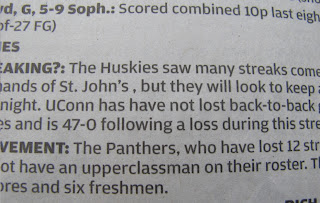 I have something I want to get rid of. You can have it for free. It's have — the one that appears in this Connecticut Post article. You may have come in peace, have, but you are a has-been; nobody wants you around anymore. The time has come to have you removed.

The sentence pictured is an example of present-perfect tense; it expresses an action that started in the past and continues into the present. To create the present-perfect tense, we need a past participle (in this case, lost) and an auxiliary verb, which is also called a helping verb. The helping verb that has what it takes in this instance is has. The subject, UConn, which is short for University of Connecticut, takes a singular verb. Has, not have, is the singular verb. Ergo, this sentence is no safe haven for have.

Have you had enough?

Getting Up to Speed

Life moves pretty fast.
If you don't stop and look around once in a while, you could miss it.

Ferris Bueller told me that, in 1986. Back then, one had to be concerned with minutes turning into hours, hours turning into days, days turning into weeks. How quaint. In today's world, every second counts. We judge life's successes in terms of kilobits per second or, if you're lucky, megabits per second. It's all about disseminating and receiving info in the Internet age. I'm one of the stragglers who still prefer a brick-and-mortar business to an e-commerce site and a real book — creased cover, yellowing pages and all — to a Nook or Kindle, so life does seem to be moving too fast for me. Spell check probably feels the same way. 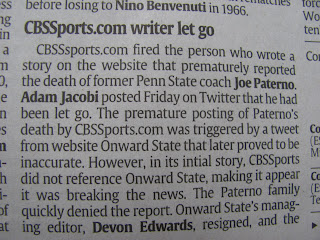 Hundreds of thousands of words exist in the English language — some scholars put the number at more than a million — and new ones are added daily. That's a lot of material for spell check to, well, check. I must say, it does a pretty good job ... though it has yet to master incorrect homophone usage. (See here.) And it's nowhere near figuring out how to stay up to date when it comes to the strange terms dotting the social media landscape at an ever-increasing pace. URLs, domain names, hashtags, usernames, blog titles, permalinks... What is spell check to do?

Not much, which is why it's up to editors and proofreaders to be vigilant when presented with, say, web addresses in an article. In this particular USA Today article, the domain name is listed correctly in the headline, yet an extra s has sneaked its way into the first reference within the story. I wouldn't let the writer go because of this oversight, but I would ask him to be master of his domain references from this point forward.

Life is infinitely faster than it was 27 years ago, when Ferris was dining at Chez Quis, attending a game at Wrigley Field and twisting and shouting on Dearborn Street. It's moving at the speed of light, in fact, yet we're always in search of "faster speeds" and "higher speeds." It's a "bit" much, no?
Posted by Owen at 8:00 AM No comments:

The Reason for the Seasons? 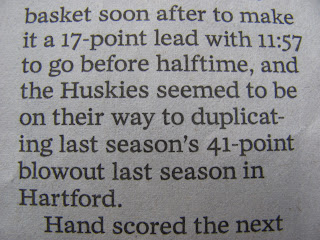 It's open season on redundancy. With the Huskies en route to duplicating a runaway victory, the writer duplicated two words in the same sentence. "Last season" and its spitting image show up within spitting distance. Such duplication is never in season. Copy that?
Posted by Owen at 8:00 AM No comments: 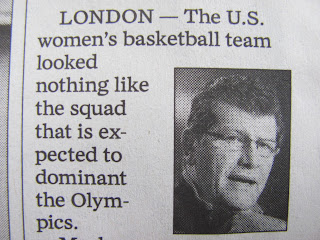 Errors dominate this short opening paragraph. I kid. Only one error has colonized.

I see LONDON. I (don’t) see France. I see a mistake ending in –ant. The 15th word in this one-sentence opener looks nothing like the word I expected to see. Well, it looks something like it. Both begin with the same six letters. At that point, however, we lose control.

You won’t prevail, dominant. Your rule is over. I’m making like an exterminator and getting rid of the –ant. With the infestation under control, dominate will, well, dominate.
Posted by Owen at 8:00 AM No comments:

No tricks, effects or illusions today, readers. What you are about to see is real.

This brief NBA game recap from USA Today reminds me of a Kardashian-Humphries marriage in its 10th week: The magic is gone. In this case, the Magic, with a capital M, is gone.

Who's to blame for this disappearance? Houdini? David Copperfield? Criss Angel? Nah. It's lesser-known illusionist David Blank, who worked his magic and — abracadabra — through sleight of hand slighted his work. He could have gone with "vs. the Orlando Magic" or "vs. Orlando" or "vs. the Magic," but when the smoke cleared and the mirrors were removed, he revealed "vs. the Orlando." That's not what I'd deem a magic touch.

You've entertained us with a disappearing act, David Blank. Now, how about a transformation act, one not nearly as theatric as turning a woman into a tiger. Turn Orlando into Magic.
Posted by Owen at 8:00 AM No comments: 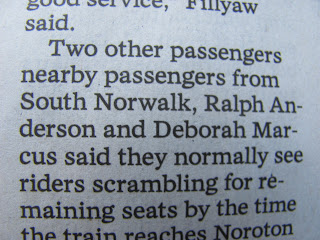 The passengers in this sentence are packed tighter than the passengers aboard the Metro-North Railroad trains this article is about.

For this crowded sentence to get back on track, the first use of passengers needs to exit at the next stop.

Open seats are tough to find on peak Metro-North New Haven Line trains into Manhattan's Grand Central Station. I know — I speak from experience. Passengers are often left standing, which doesn't seem fair after paying a hefty fare. We're getting taken for a ride. That's not today's issue, however. It's uh, er... What was it again? I've lost my train of thought.

Oh, right: In this sentence, only one of the passengers should have been left standing.

Let me leave you with one more thing before our train departs the station: A comma is needed after Marcus. Come aboard, comma! Plenty of seats available.
Posted by Owen at 8:00 AM No comments: 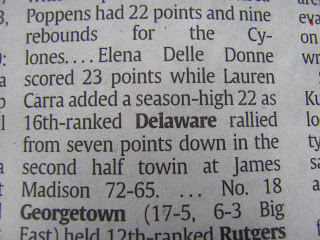 A couple of small words in this USA Today excerpt are tighter than North Korea's grip on national news. To wit, "to win" has become towin. Don't wig out, though — it's just a mistake, not a new trend. Imagine if it were. What would become of, say, "to get her" if we put those three words together?

This typo would have connected with me even more if the conjoined words had unwittingly formed a new, real word. I've come up with a list of two- and three-word groupings that create longer, unrelated words:

Can you think of any others, readers? If so, pass them on tome. Oops. To me.
Posted by Owen at 8:00 AM No comments: 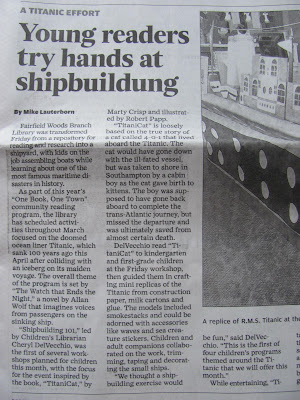 Oh, now you've stepped in it, Connecticut Post! The 12-year-old boy inside of me is going to have some fun with this post. It's easy to build a case against today's dinged headline, which has the build of a scrawny teen and definitely was not built for accuracy.

All hands on the poop deck! A faulty headline has surfaced. Some ding-dong made ding dung. Instead of shipbuilding, we have shipbuildung. We must employ some anti-manure maneuvers or we'll be in a Titanic-like state of deep doo-doo. Can we remove that foul ending, please? Get a shovel. Or a bilge pump. As your captain, I order you to, well, cut the crap. Literally. We run a tight ship around here, and we steer clear of allowing strange passengers on board.

The vessel has been scrubbed clean? That buoys my spirits. Our voyage isn't complete, however; another shipwreck is on the horizon. If you zoom in on the photo caption, you'll discover a second "shipping" error. It's too bad we don't have a replica of replica. Instead, we have a cheap imitation. Replice, you are the Mr. Pibb to replica's Dr Pepper.

Can someone flag down an editor at the Daily News, a New York newspaper printed in tabloid form? I don’t want to rain on anyone’s parade, but I must point out that the paper hoisted an improper image in this full-page ad, which ran a year ago today. I’m vexed by what I came across during vexillology*. 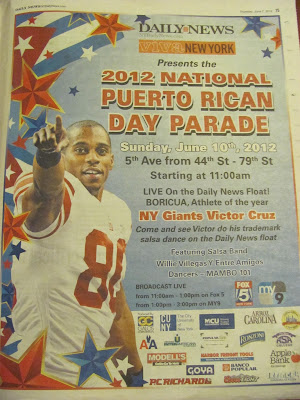 Each year, the Puerto Rican Day Parade runs along Fifth Avenue in New York City on the second Sunday in June. The parade — one of the largest in the Big Apple — attracts millions of spectators.

To promote last year’s parade, the Daily News published this ad featuring Victor Cruz, a New York Giants wide receiver who has a Puerto Rican mother, and the Puerto Rican flag. The paper half mast amassed a master ad.

That’s Cruz, all right, but that flag isn’t right. It doesn’t symbolize the subject of the parade, and like an American headed to Paris, it needs to fly.

The flag’s colors are correct, but they’re not in the proper positions. The flag flying in the upper left depicts one of four Caribbean islands that constitute the Greater Antilles — but not the correct one. What’s pictured is the Cuban flag. To show a Puerto Rican’s true colors, those flag hues must be inverted.

The creator of this ad red, white and blew it. Someone on staff needs to march into the editing room and wave the proper flag. Otherwise, the Daily News is Cruz-ing for a bruising.


* Vexillology: the study of flags

Welcome to Our Ool

What kind of word begins with two r's? I need a translator. I could ask C-3PO, who is fluent in over 6 million forms of communication, but he's too whiny for my tastes. I will instead seek the service of everyone's favorite astromech droid, R2-D2. That's R2, for short. Oh, RDRR. (Sound it out.) 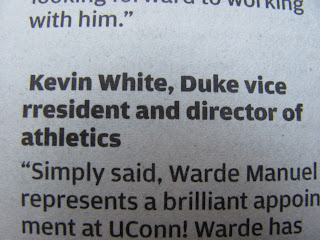 R2 tinkled with bleeps and whistles as he explained to me that the first word on the second line is like a flushed toilet — there is no p in it. If this were my swimming pool, I'd say let's keep it that way. This is no pool, however; it's a vice president at prestigious Duke University. We've got a serious situation, and we need to fix the leak. Relieve yourself of that first r. Or I'll be pissed.
Posted by Owen at 8:00 AM No comments: 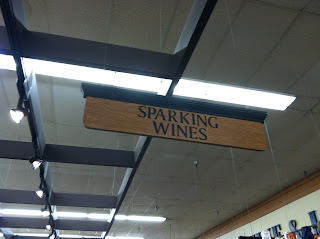 I heard about today's typo through the grapevine. Actually, my effervescent friend Lindsay, of IAMNOTASTALKER, made me aware of it while she was visiting her parents outside of Palm Springs, California. She felt compelled to whine about this wine sign.

"Apparently, the champagnes at the Albertsons in La Quinta can be ignited," she texted me from inside the grocery store.

Lindsay's right. Sparks are flying. An L has been discharged. That omission has me, like a fine wine, fermenting.

A champagne-staking effort was not made to get this wooden sign right. Could it be that someone imbibed a bit too much bubbly prior to making it?

Head back into your wine cellar, wine seller, and store another bottle of L in that first word. Follow the alphabet's lead and plug it in right after the K. Do that, and a spark of possibility remains that this situation can be remedied.

This post sparkled with wit, no?
Posted by Owen at 8:00 AM 2 comments: