I'm going to say something that my mom, a home-shopping addict, never would: I'm not buying that, QVC. 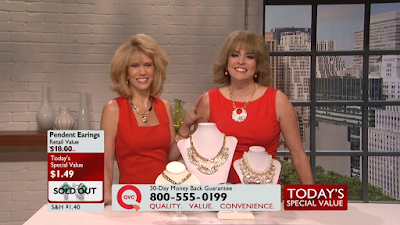 I'm not buying what host Kristen Wiig and Cecily Strong were selling in their "QVC Auditions" sketch on last week's episode of Saturday Night Live. I prefer the variant spelling, pendant, but that's not the basis for my frugality. Neither is the missing hyphen in money-back. Are our ladies in red selling nautical ropes used to fasten a corner of a sail to the yard? No? Then don't dangle earings in front of us. Repair your broken jewelry.

Earings is to earrings what cubic zirconia is to diamonds. They're similar, but not the same.

What do I have in common with a small, button-like earring mounted on a metal post? Not much. Only one of us is a stud.

Ah, the Redskins. No team nickname in professional sports evokes stronger opinions. Some find it honorable; others consider it offensive. Is it right? Is it wrong? That’s debatable.

Ah, Betts. No player surname in professional sports is much easier to spell. Is it right? Is it wrong? There’s no debate — it’s right. Except when it isn’t.

Ladell Betts, a former running back, played eight seasons for the Washington Redskins. During a preseason game against the Baltimore Ravens in his final season with Washington, Betts sported a jersey that really, well, gets under my skin. 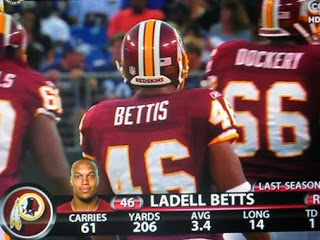 On Aug. 13, 2009 — less than four months after another D.C.-based team suffered a uniform breakdown, which I blogged about here — someone confused Betts with a different running back, Jerome “the Bus” Bettis.

You missed the Bus, Redskins; Bettis, a six-time Pro Bowler with the Pittsburgh Steelers, retired following the 2005 season.

So, lose an I. That’ll bring out the BETTS in Ladell. 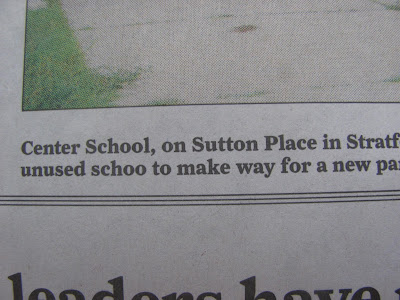 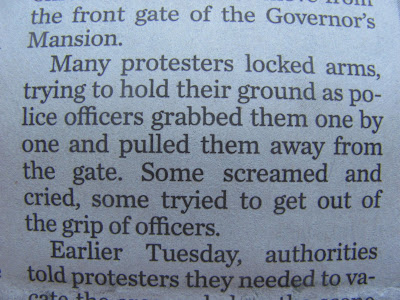 Try harder.
Posted by Owen at 8:00 AM No comments:

Is it ironic if you err when you err?

To err is human. To err instead of er is hellish — to an editor, anyway.

Err is a verb meaning to make a mistake. Er is an interjection expressing hesitation or uncertainty, similar to uh or um. Examples: Fourteen times six is, er, 84. The capital of Illinois is Chicago, er, Springfield.

When you're not sure what to say, say er. Otherwise, you err. 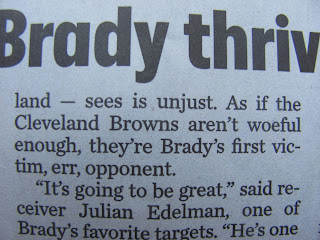 I'll let the writer off the hook, though. After all, to forgive is devine, er, divine.
Posted by Owen at 8:00 AM No comments:

"Players" Came Out of Left Field In the (doctored) words of Hamlet on the eve of The Murder of Gonzago, the plays is the thing.
Posted by Owen at 8:00 AM No comments: