And don’t tell me Olga Perez was the source of uproarious laughter in 1974 because, well, I can’t get behind that. 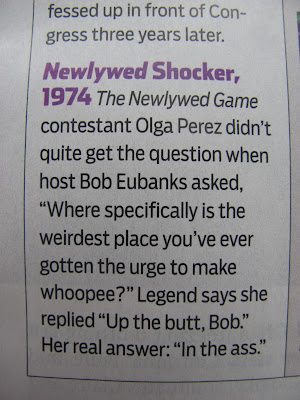 In a rundown of “the wildest game-show moments” in its current issue, TV Guide included an outrageous Newlywed Game incident, one long thought to be an urban legend.

The Newlywed Game, for those too young to remember, was a game show hosted by Bob Eubanks that pitted married couples against one another. Husbands had to predict how their wives would answer questions, and vice versa. Many of the questions dealt with “making whoopee,” 1970s slang for sex. Couples earned points every time a prediction matched a spouse’s answer.

For years, rumors swirled that a wife on the show, when asked to name the weirdest place she’d ever had sex, said, “Up the butt, Bob.”

Did this really happen? Many who were watching on syndication in the ‘70s swore it did, but many, including Eubanks, insisted otherwise. Eubanks even offered $10,000 to anyone who could provide proof.

Though the rumored quote was slightly off, the urban legend morphed from fable to fact in 2002, when The Most Outrageous Game Show Moments, an NBC special, included the infamous footage.

With his wife sequestered offstage, Hank Perez was asked the following five-point question:


Where specifically will your wife say is the weirdest place she’s ever gotten the urge to make whoopee?

When Olga returned to the stage, Eubanks asked her the same question. She could have said something like in the ocean, on a plane or, mirroring Phoebe in “The One with the Blackout” episode of Friends, in Milwaukee. Instead, after hesitating, laughing nervously and even seeking prohibited help from her husband, Olga made game-show history when she replied, “In the ass.” (Hank guessed that his wife would say “in the car.” No match. No five points.)

This bad ass moment remained an urban legend for years because, in part, the VCR mass market was in its infancy and cable television had yet to explode in the ‘70s. But when exactly during the decade of disco, bell-bottoms and 8-tracks did Olga share TMI with game-show fans? Not 1974. As Eubanks informs us in The Most Outrageous Game Show Moments, “The year was 1977.” Olga and Hank Perez were one of four couples on a “Maternity Day” episode during the show’s second run.

You can check out the Most Outrageous Game Show Moments clip here. Want to check out some audacious ‘70s clothes, mustaches and attitudes? Watch the entire Newlywed Game episode here. (Note: Olga’s infamous reply butts in at around the 8:30 mark.)

Are you curious how Olga and Hank fared on the show? They trailed two couples by a score of 40-20 with only one question remaining. It was a 25-point bonus question, and a correct answer would make the Perezes the grand-prize winners. Hank got it right. They won 45-40. I guess you can say they came from behind. 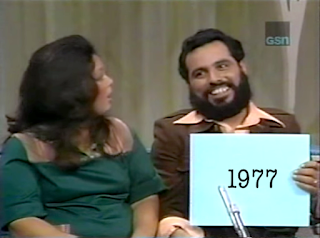 Oh, Canada. Your neighbor to the south thanks you for insulin, Trivia Pursuit and Michael J. Fox, among other things, but you did give us Justin Bieber. It's payback time, Connecticut Post style. 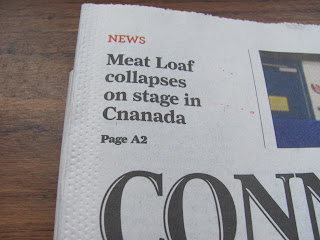 I'm not sure what my local newspaper was thinking. Since when is the Great White North spelled with seven letters? A dollar coin in Canada is a loonie. A second n in Canada is loony. The first must be removed, like pennies from Canadian circulation.

Don't worry, Canada, I stand on guard for thee. I'll protect you from enemies foreign, like the Connecticut Post, and domestic.
Posted by Owen at 8:00 AM No comments: