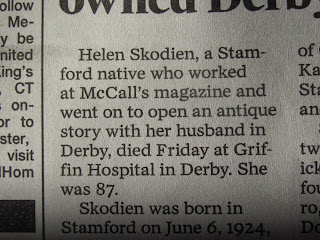 I've got a good one in store for my readers today. Here's the story:

It looks like a Connecticut Post editor failed to mind the store when the writer went away.

What, exactly, is an "antique story"? Is it one of Aesop's fables? Is it the second floor of Boston's Old State House?

Helen Skodien and her husband opened an antique store, of course. Alas, it wasn't the newspaper's "store" policy to spell the word with an e. 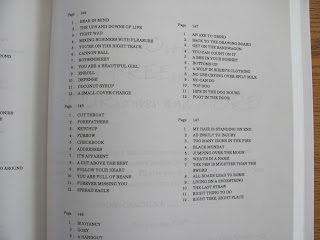 Just between us, I don't think the editors of Thinklers! A Collection of Brain Ticklers and I are on the same page.

This photo is from a word-puzzles book my mom was tackling. It shows an answers page for a section of "Position Puzzles," more commonly referred to as word rebuses. In case you're not familiar, a word rebus is a puzzle that uses the positioning, size and style of letters and words to represent other words or expressions. Here are two examples:

After attempting to solve the word rebuses on page 148, my mom checked the corresponding answers page. What she found were answers ... and errors.

It looks as if someone was ... 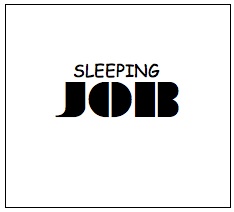 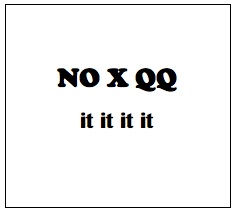 Change that second 147 to 148, Missing Piece Press, and your readers will no longer be puzzled.

Bonus points if you noticed that the answer to No. 2 on page 148 should be "ADD INSULT TO INJURY" and/or that the tops of the two columns don't align.

No need for a spirited debate today. This error is tangible. I did not have to attain enlightenment in order for my two eyes to see that the two i's in spiritual inhabit the wrong place. The spirits have moved them, I suppose.

Once we shift each i one character space to the left, I'll be in high spirits. 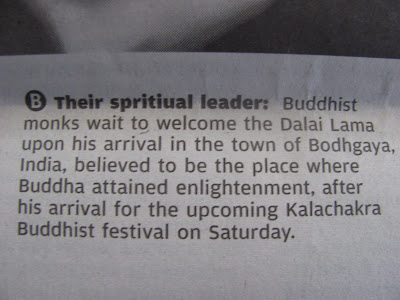 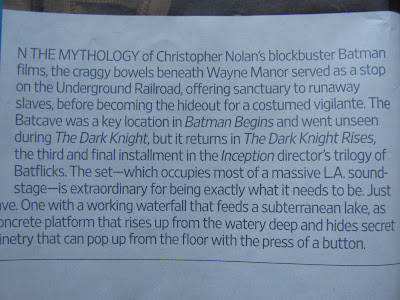 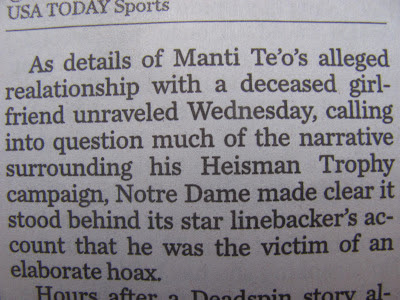 When I was a boy, imaginary friends were never part of my inner circle. As an adult, I have an imaginary girlfriend. She’s real, actually (her name is Jennifer Love Hewitt), though only in my imagination is she my better half.

Turns out, I’m not the only adult with a sham sweetheart.

By now, sports fan or not, you are familiar with the Deadspin story that made a mete’oric impact. Manti Te’o, a former notre dame* linebacker, had a girlfriend who, like the Astrodome turf or WALL•E’s intelligence, was artificial.

Lennay Kekua, whom Te’o dated for two years despite never meeting and who died of leukemia during Te’o’s senior season, never existed. She was “born” via a computer, in the manner Gary and Wyatt created Lisa in Weird Science, though her being required no hooked-up doll. The heroine in a fable, she was killed off last September, made to suffer the same fate as Nikki and Paulo, from Lost, and myriad other despised TV characters. Four months later, she returned to haunt Te’o from beyond the grave, wreaking notre damage throughout cyberspace.

If, as he claimed in an off-camera ESPN interview last Friday, he didn’t perpetrate the hoax, he certainly perpetuated it, basking in the attention, which those at notre dame tend to do. Is he a gullible young man who helps Nigerian princes transfer large sums of money out of the country? Is he a duplicitous, publicity-craving schemer — a lyin’ Hawaiian? Is he a bit of both?

The article’s opening sentence drips with irony. The seventh word, an amalgam of real and relationship, shows up in an article about a relationship that was anything but real. That word, like Lennay Kekua, the Loch Ness Monster and portions of A Million Little Pieces, is not real. Really.

Bereft of oxygen, still Kekua breathed. Deceit nourished her. A voracious, 24/7 news cycle was her lifeblood. She continued to exist, living off lies, running on M.T. Empirical she was not. Fantastical she was. In her gran—

* For those curious about the lack of capitalization, please refer to last Monday’s post.

South Florida is a member of the Big East, not the Big Eas. Should be eas, er, easy to get that right, yet the t is missing in this Connecticut Post game preview. Sort of like it was with the Dartmouth and two other ships moored in Boston Harbor on Dec. 16, 1773. 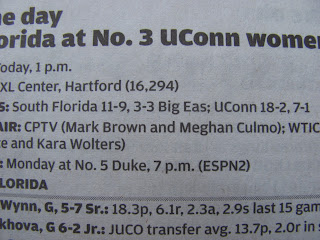 Live and in Love 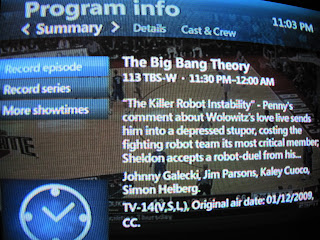 I was watching a Duke-Ohio State basketball game a while back, and when it got out of hand (sorry, Duke fans) I decided to see if anything else was on. I'm always up for a repeat of The Big Bang Theory. This particular episode, as you'll notice, is about fighting robots and Wolowitz's "love live." Huh? I'm confused. Is Wolowitz upset because Penny made a live comment about his love? I guess I'll have to tune in to find out. 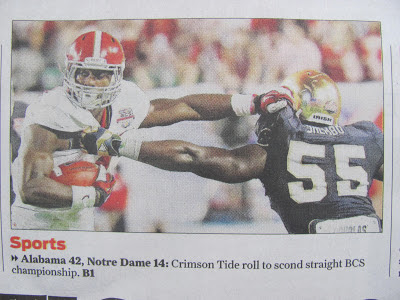 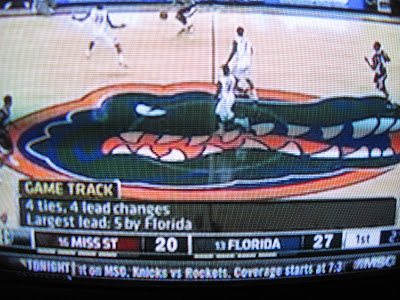 This "GAME TRACK" graphic popped up just before halftime of a basketball game between my alma mater and Mississippi State. I'll let my readers do the math. 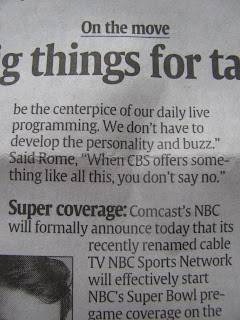 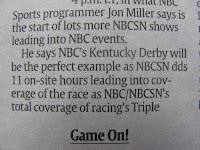 My relative's doctor found nothing during her colonoscopy. A success! I found two misspellings during my probe. A success!
Posted by Owen at 8:00 AM 2 comments: 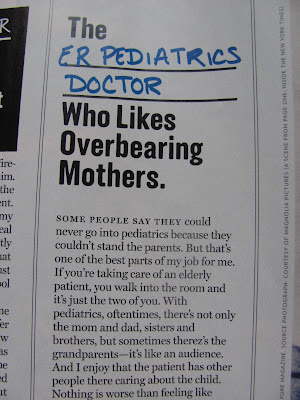 What's with the z-instead-of-s approach? I suppose it's for marketing purposes and is considered zippy, or zingy. I find it a tad unprofessional. All the gangstaz and playaz can continue to zpell while the rest of us spell, but I wish they wouldn't. Don't they realise — I mean realize — it's zany?
Posted by Owen at 8:00 AM No comments: