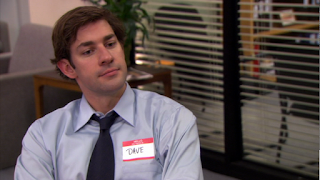 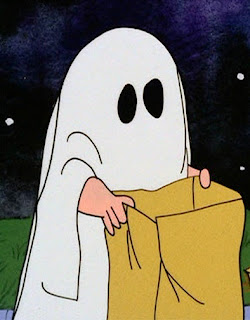 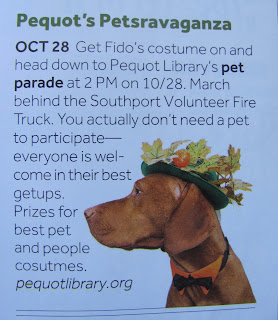 
HAPPY HALLOWEEN!
Posted by Owen at 8:00 AM No comments:

Yesterday I intercepted that phonetically mellifluous message, composed by the letter a. The vowels a and e, separated by only three consonants, are worlds apart, despite their shared interests in arts and entertainment.

A resides in Malibu, in a mansion. E lives in Detroit, in a hovel.

A is in a gassed-up Bugatti. E drives around in a Gremlin that’s usually running on E.

A is rolling in cash. E is in debt.

A is always in class. E is in detention — twice. (Which may explain why a always gets better grades.)

A attends every party. E sits at home.

Neither a nor e got the girl though. I did. Enough about me. I mean, enough about i.

While “Mullen” over the Sporting News blurb below, I discovered something awful — and it’s not awful. It’s awfully close to awful. 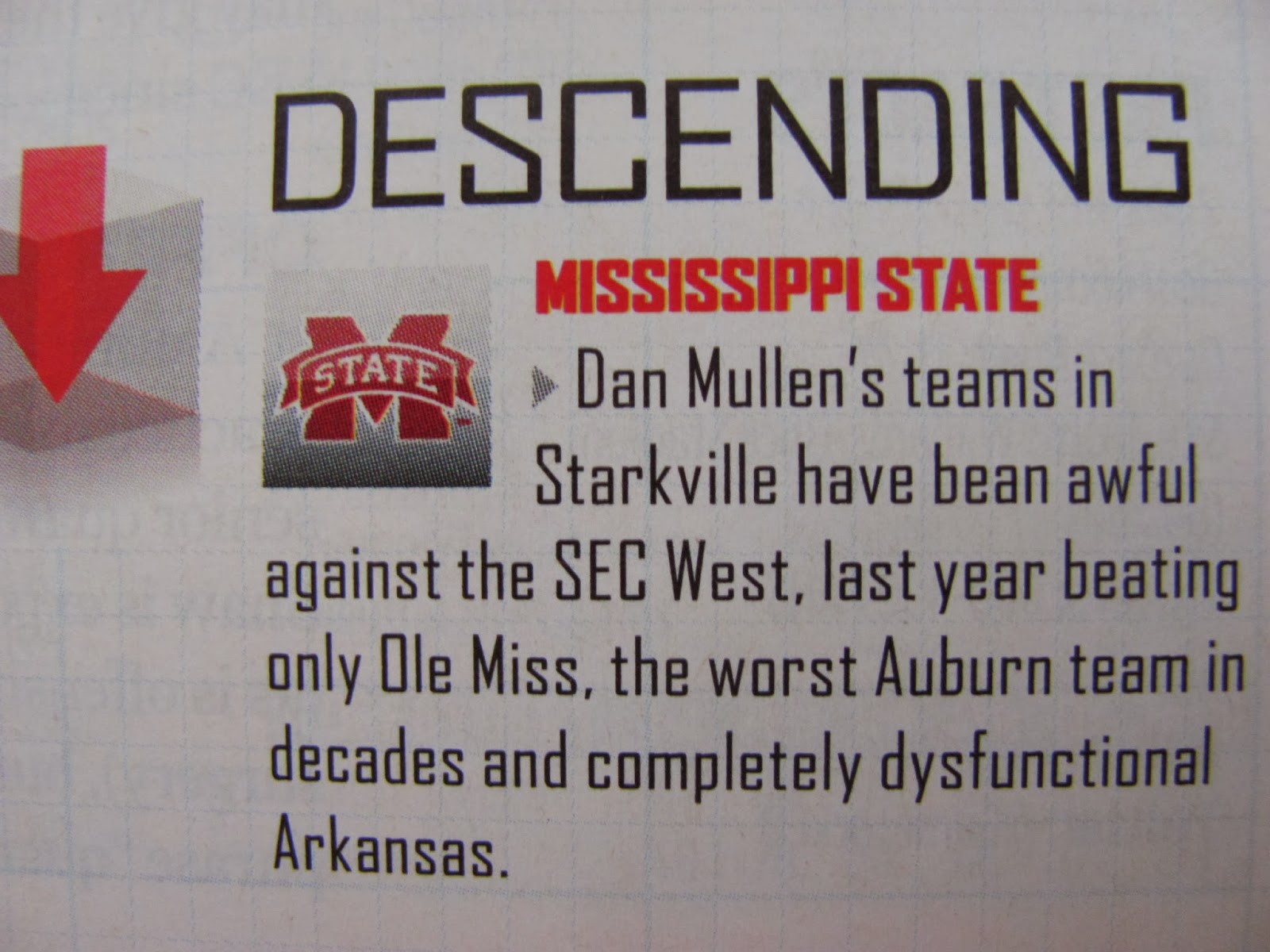 This nonsensical sentence is full of beans. Well, my bean counter registers one. It should read zero. Unfortunately, bean sprouts where been belongs.

It appears the message relayed in Monday's post didn't reach everyone. 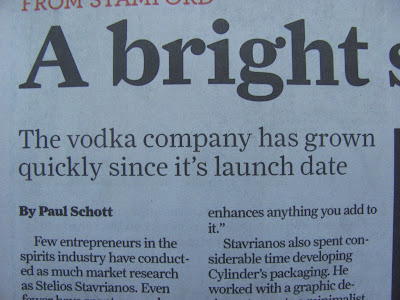 Item No. 1 on today's pre-launch checklist: Change it's to its. We need the possessive form of the pronoun it, not the contraction of it is.

Why does this error happen so often? Its frequency is alarming. It's not OK.
Posted by Owen at 8:00 AM No comments: 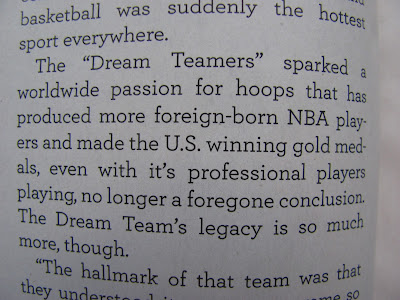 It's supposed to be its.

Its problem is the apostrophe.

Actions speak louder than words. We all know that. But what if your ACTION has too many words? You’re going to hear about it — deafeningly and resoundingly.

Follow Sports Illustrated’s course of ACTION. When you near the finish line, you’re going to trip over something. Someone, it seems, wanted a bigger piece of the action. Figures. (Action … figures. Get it? I’m toying with you.)

We’ve got dupes. Oops. The exists in duplicate. I don’t react well to that. A “the the” belongs in ACTION as much as MetLife Stadium — home of the New York Giants — belongs in East Rutherford, New Jersey. It’s time to take action against a word called into ACTION twice.

With a simple extraction, we can fix this ACTION infraction and put the out of action. Such a simple, elegant, poetic solution, huh?

I await your stunned reaction.


ACTION Sports Illustrated writes a fantasy football sentence, throws in the same word back-to-back and leads editor to point out the repetition.

ê
REACTION The editor isn’t Shakespeare, and the “the the” theme has been broached before, here and here. Move along.
Posted by Owen at 8:00 AM No comments:

Time to Have "the" Talk 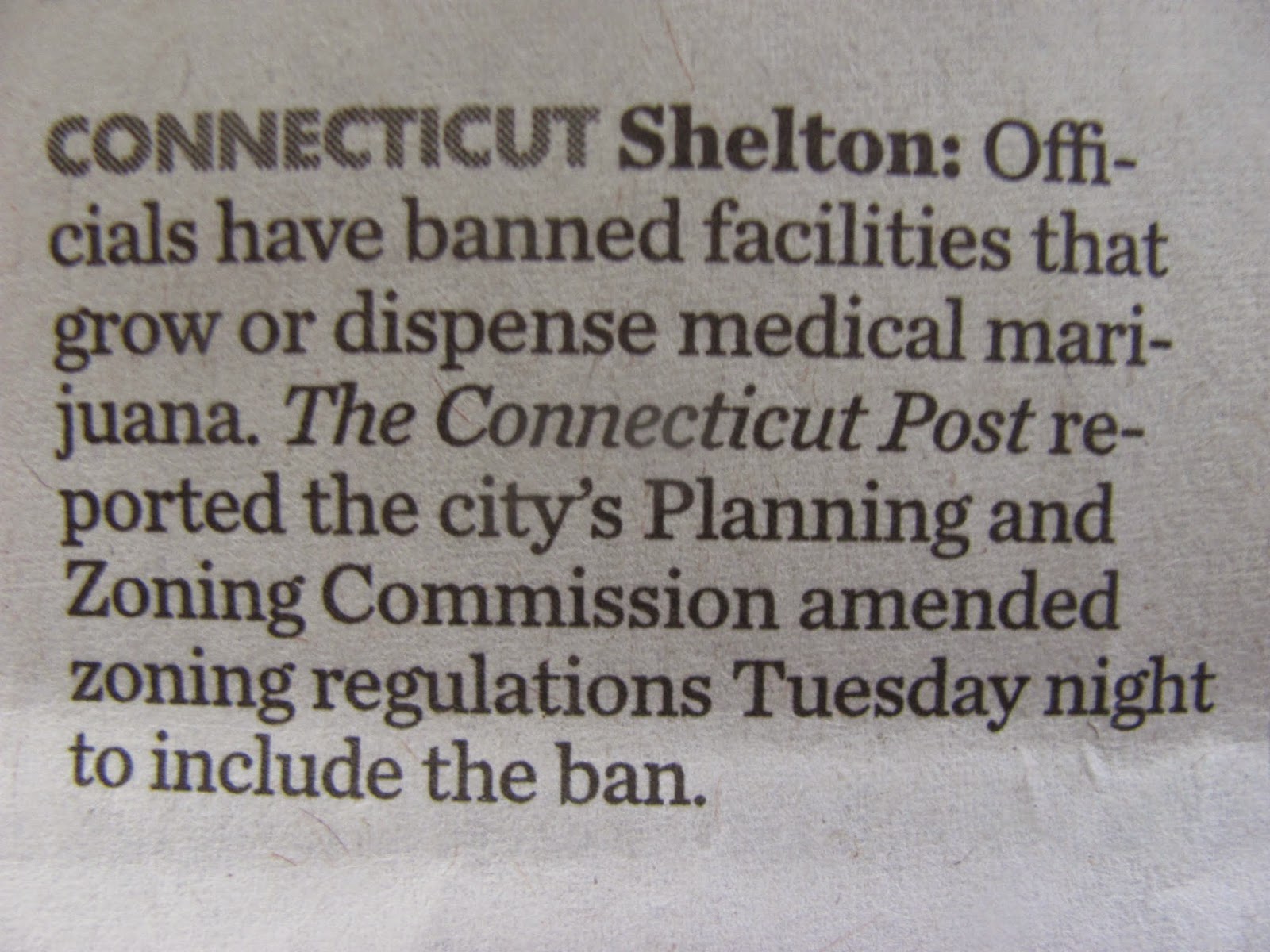 The “State-by-State” news brief pictured at right was in the USA Today. Note I didn’t refer to the newspaper as The USA Today. For some papers, the is part of the official name, and in those instances, it must be capitalized and italicized. Otherwise it needs to be lowercased (unless it starts a sentence, of course) and set in a regular, or roman, font, if included at all.

The USA Today blurb mentions my local paper, to which I subscribe. That paper is the Connecticut Post. There is no the in its official name. Need proof? See below. Note the lack of the. 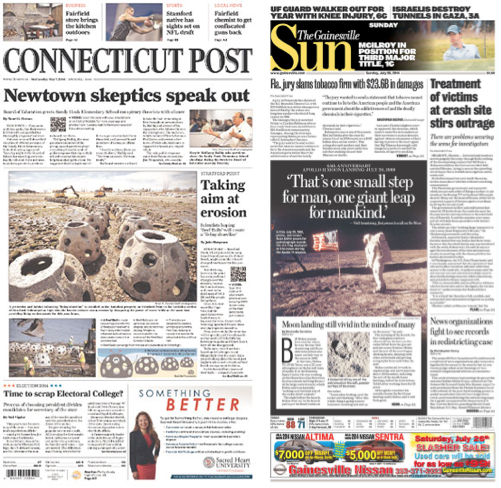 Sometimes the is right, then wrong, then right again. In the spring of 2014, a British daily founded in 1754 restored the after going nearly half a century without it. The Yorkshire Post dropped its article opener in 1968, only to witness the return of the following a 46-year hiatus. Why the change? As new editor Jeremy Clifford told Johnston Press:

“We are THE newspaper campaigning for Yorkshire. We set the agenda, identify the issues that concern the people of this region and ensure Yorkshire’s voice is heard. … Reintroducing the cements our position of being THE best place for news, sport, entertainment, culture, analysis, debate and campaigning. Those three letters set the standard by which we will continue to be THE national newspaper for Yorkshire.”

The. We give that ubiquitous function word little thought. Its official inclusion (or omission) may seem inconsequential, but accuracy is important. Do you read the New York Post or The New York Times, the Los Angeles Times or The Washington Post, the Chicago Tribune or The Atlanta Journal-Constitution?

The makes a difference, and not only on a newspaper’s nameplate. Consider other mediums.

Movies
The Changeling came out in 1980, but Changeling didn’t hit theaters for another 28 years. Evil Dead premiered 32 years after The Evil Dead made its 1981 debut. A whopping 64 years separate The Killers (1946) and Killers (2010). Deep Blue Sea, a 1999 action movie about scientists battling sharks at a remote research facility, and The Deep Blue Sea, a 1955 British drama about infidelity, are oceans apart. 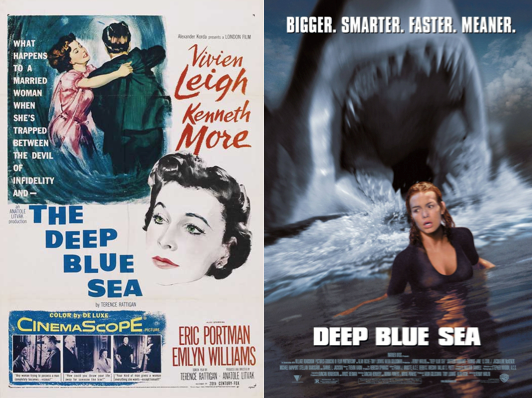 Television
The Twilight Zone ran on CBS for five seasons, from 1959 to 1964, near the end of television’s “Golden Age.” No, wait. Twilight Zone aired during those five gold-specked seasons. No, no, wait. The truth is, The Twilight Zone ran for the first three seasons before crossing over into the Twilight Zone. For reasons as undefined as, yes, a twilight zone, the Rod Serling series dropped the when the fourth season began as a midseason replacement in January 1963 for Fair Exchange, the very show that had replaced The Twilight Zone on CBS’ 1962 fall schedule after the anthology series failed to secure a sponsor for a fourth season.

That Twilight Zone trim may have been the first example of television losing the, but it wasn’t the only one.

Discovery Channel, home to Shark Week, took a bite out of its name in 1995. Back then, the cable station was known as The Discovery Channel. The head honchos, however, figured that dropping the from the network’s name would help the company’s expansion as a multiplatform brand. 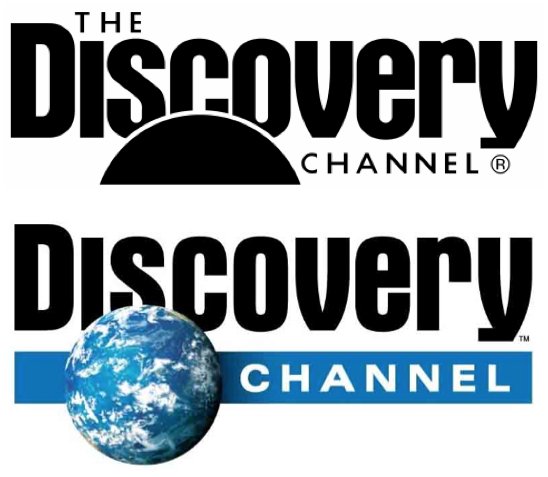 On March 20, 2008, The History Channel was history. In hopes of eroding its image as a stuffy network offering nothing more than World War II documentaries, the cable channel dropped the and channel from its name. According to executive vice president Nancy Dubuc, this, ahem, historic change was part of a multimedia rebranding effort. “We really look at this as more of an evolution,” Dubuc said. “People refer to us as History, and the listings refer to us as History, and everybody refers to us as History. So we really just wanted to keep the name in step where we were as a brand. And we really do see the brand as all things history, and this evolution embraces that.”

What popular website was launched in a Harvard dorm in 2004? Did you guess Facebook? You’re wrong, technically. When Mark Zuckerberg’s social networking site began, it was called Thefacebook, and it remained that way for a year, until the company purchased the domain name facebook.com for a cool $200,000 and dropped its first three letters. My guess is that the world’s largest social network wanted to be known as Facebook all along, but a bit of domain squatting prevented it. If you believe what you see at the movies, Napster co-founder Sean Parker spurred the change. At the end of his first meeting with Zuckerberg, Parker, played by Justin Timberlake in The Social Network, offered the following advice: “Drop the the. Just Facebook. It’s cleaner.”

Parker may have considered the a dirty word, so to speak, but its level of impurity must be measured on a case-by-case basis. Sometimes that definite article definitely should be dropped; sometimes it’s a keeper.

Look at the bottom of the leaderboard — at the end of an ERA, if you will. 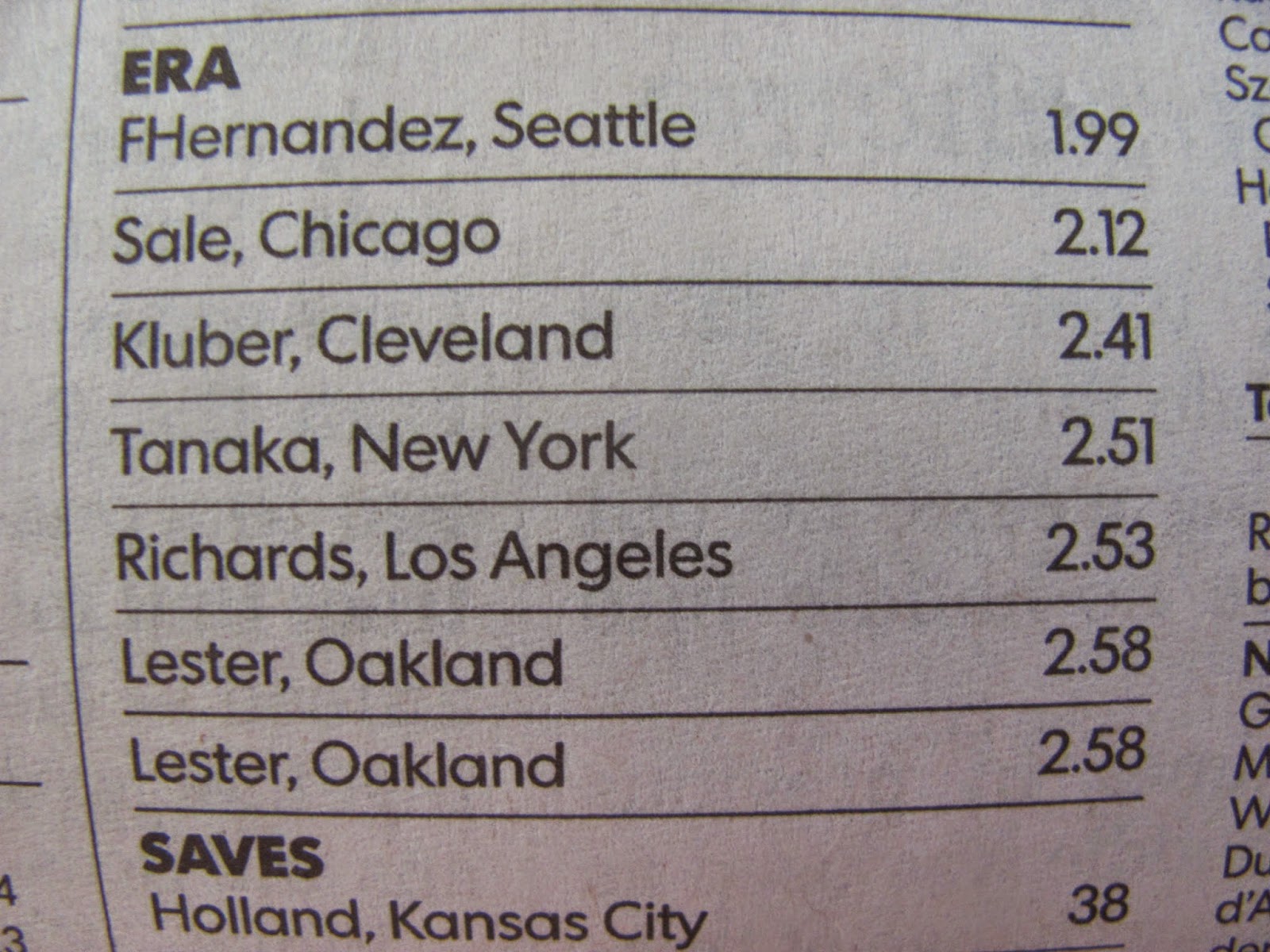 In a rundown of Major League Baseball’s earned run average leaders, Oakland’s Lester is in a sixth-place tie with … Oakland’s Lester. This list, it seems, is made of poly-Lester. Like an inconsiderate parker, the pitcher is taking up two spots.

We could do nothing about this ERA error, and hope one Lester festers, but why not be proactive? We can pitch Lester. Let’s make like many of the pitcher’s initial offerings to a batter: Strike one.

But which Lester is the lesser of two evils? In terms of rank, there is an A-Lester and a B-Lester. The A-Lester must be a bigger name, even though both have six letters. So, let’s get rid of the less popular B-Lester.

And don’t even think about adding a C-Lester and a D-Lester. The last thing we need is mo’ Lesters. (Groan!)
Posted by Owen at 8:00 AM No comments: