Colombia's Capital Is No Secret

Every blogger is having a field day with allegations that a fact error debased Colombia’s capital. OK, maybe not every blogger. 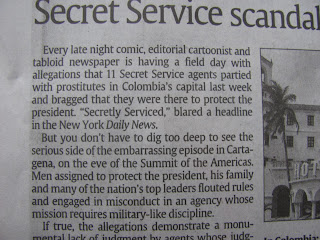 To “summit” up, Colombia’s capital is Bogotá. Cartagena is a bogus capital; it’s merely a large city on Colombia’s northern coast — a city where prostitutes were pressed into Service.

Have You Ever Spelled It?

The stall door swings open, banging against the lavatory wall as it does. Farmer Ted appears. He pauses for a second, for dramatic effect, and then … he holds ‘em high, for all to see. Behold, underpants dotted with little hearts. Ooh! Ah!

I’ve got something just as exciting to share today, and I won’t charge you a buck to get a glimpse. It’s hard to miss, given its top-of-the-page placement and all-caps, underlined-twice treatment. See it? Yep, you see it. Your eyes are wide. Your mouth is agape. It’s as if you’ve seen a ghost — or a girl’s panties. Forget the panties, geek; this is better. (Well, that’s debatable.) 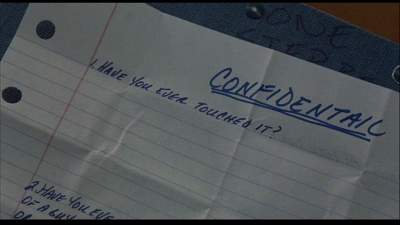 The four letters at the tail end of confidential are, it’s no secret, essential. Yet the private parts seen here are not sequential.

Jennifer, you see, gave Samantha Baker this sex test in Child Development. Samantha had to take the test during Independent Study and then pass it along to her friend Randy.

Jennifer nailed the first nine steps, but then she impersonated Farmer Ted on the dance floor and made a strange move. Did she spell confidential correctly? My answer to that is the same as the one Samantha gave to the first question on the aforementioned sex test: almost. Or perhaps, if I wanted to be a tad harsher, my answer would mirror Samantha’s answer to the 10th and final question: NO!!!

John Hughes, the director whose career-defining Sixteen Candles/The Breakfast Club/Weird Science triumvirate coincided with my youth, may have deliberately included the mistake, as a way of showing that high school kids who create sex tests with questions like “Have you ever touched it?” and “Have you ever done it?” might have trouble spelling certain four-syllable words. It’s got to be a joke, like grandparents forgetting a birthday. We’ll never know, though, so we must assume this tailspin was unintentional.

Confidentail? Nuh-uh. Confidential? That’s ideal, for sure — like Jake Ryan.
Posted by Owen at 8:00 AM No comments:

Not at Full Strength

Where did it all go wrong?

I, like Willy Loman, have an inability to accept change. Take, for example, the alteration made to the last word in the headline. There is strength in numbers, to be sure, but these numbers don’t add up. Strength has eight letters; I only see seven. The second t, like Willy’s name, was never in the paper. 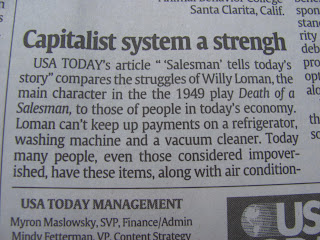 The mighty continue to fall in the body copy. The writer appears to have a weakness for article repetition. How else to explain putting one the in front of the other? Perhaps the Lomans will let me borrow their vacuum — the one for which three and a half is due on the fifteenth — so I can make one the (or the other) disappear.

I’m not buying what this writer is selling. I know what I want, and I’m going out to get it. I want some t, and I want to get rid of the.

That’s it for today. I’m tired. Hey, a small man can be just as exhausted as a great man. Tying Up a Few Loose "Ands"

And a one and a two and a three… 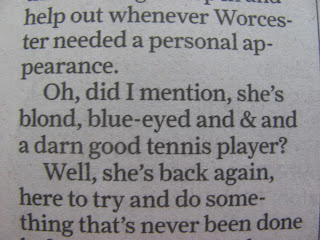 The paragraph pictured above has and, & and and on hand. Tri-and? Try again. The first and can stay, but keep your other two ands off this sentence.

Did the writer’s overuse of and — spelled out and in symbol form — create confusion? And how! The best of us have written “and and” from time to time, but I’m flummoxed by the insertion of an ampersand — an and stand-in — in that and span. Symbols don’t often appear in lieu of the words they represent in the body of newspaper articles. They don’t often show up in blogs, either.

At × though, they do. A small % of writers think symbols are > words. I’m not so sure I agree, but I decided to try this approach for ~ ½ of today’s post. The treatment has its +s. When done proficiently, a # of words, like toxins during a : cleansing, are removed. The ™ of any good writer is the use of @ least 3 symbols per sentence, and 10 symbols in one sentence is the Au standard. During a brief . in the late ‘90s, I averaged a dozen symbols per paragraph, which was best in my age [. In literary circles, I was a *; I had no =. Enough boasting. It’s time for me to —. If my plan worked, I managed to elicit a :) from at least one reader. Was that you? It was? Ah, that’s ♫ to my ears. 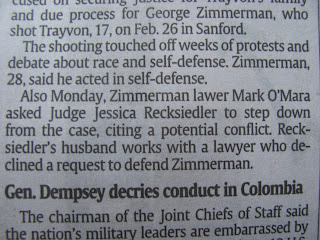 Two problems exist in the opening sentence — and both occur next to a number. 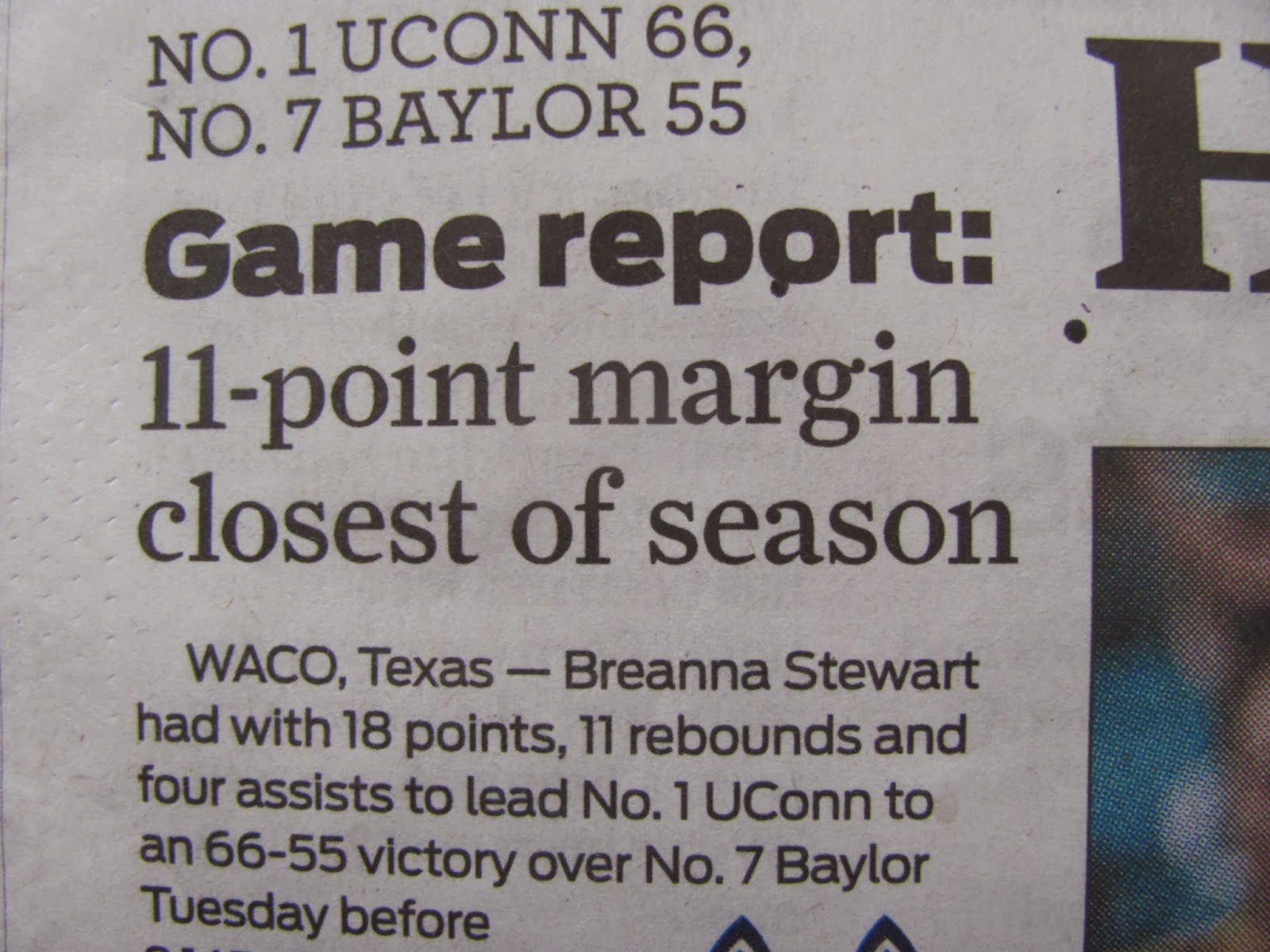 18
Points scored by Breanna Stewart
Should her point total be with or without with? Without. Definitely without. Withdraw, with, you withering preposition!

66
Points scored by the University of Connecticut
Nix the letter affixed to the word in front of 66. We want an a, not an an, and we want it anon. 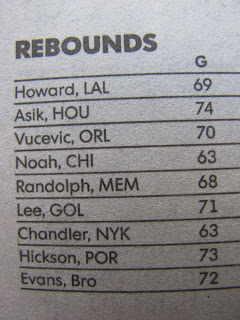 I’m neither melancholy nor a Smurf, however. Well, I suppose I’m Grouchy, but that’s because I live in Connecticut, a blue state — and I’m not referring to politics. When it comes to weather maps, Connecticut is, it seems, perpetually blue.

In the Weather.com map below, for example, my home state is tinted light blue to represent COLDER, one of four temperature-related swaths. I count four colors and four labels. That makes sense, map-wise and math-wise. 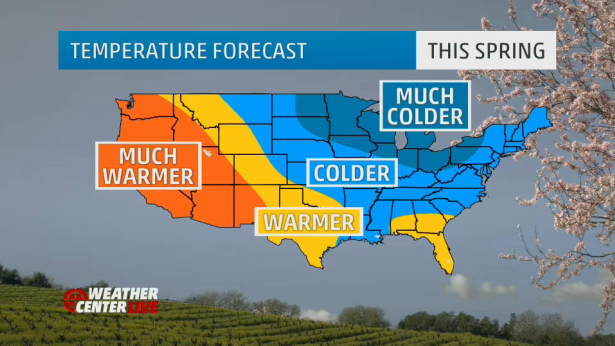 Do you remember the warmer/colder game? You search for something, and if you take a step in the right direction, you are informed that you are getting warmer. When you get really close, you’re hot, even burning! Move too far in the wrong direction, however, and you risk game-grade hypothermia. Let’s play! Can you find the error in the Weather.com map pictured below? 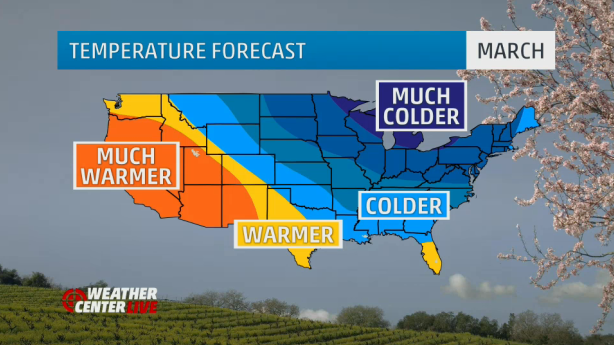 It only shows 48 states?
Cold.

North Dakota should be below South Dakota?
Colder.

There is no A in TEMPERATURE?
Freezing!

Something is missing?
Warm.

The map above has the blues … four of them, in fact. The majority of the United States is divided into four shades of blue. (For our purposes, let’s label them, from left to right, azure, blue-gray, denim and navy.) Yet the map contains only two bluish, boxed labels. Someone royally blew it. Why did the cartographer say cyan-ara to the labels for the blue-gray and denim zones? (I apologize for the colorful, Japanese-based pun.) The boxed labels fell off the map, a la Jake Lloyd after The Phantom Menace. They should, like reports that Captain and Tennille were divorcing, come out of the blue.

That concludes today’s color commentary. Stay orange (or at least yellow), readers!
Posted by Owen at 4:38 PM No comments: