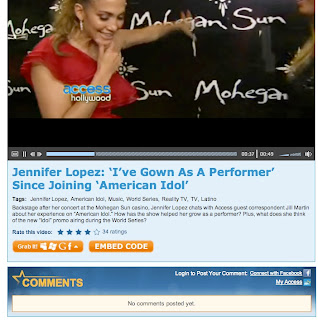 Access Hollywood posted a short video of Jennifer Lopez speaking with a reporter after an October concert in Connecticut. In the video, J.Lo mentioned that she's grown as a performer since being on American Idol. Perhaps she didn't enunciate, because the Access Hollywood headline, which included a direct quote from Lopez, replaced grown with gown. Groan.
Posted by Owen at 8:00 AM No comments:

My good friend Lindsay, of IAMNOTASTALKER, sent me a link to this "City Traveler" blog (from CityPASS) because she spotted a major fact error. While reading the article, about the top cities in which to set a holiday movie, I spotted an additional fact error. Allow me to share them both.

Why, at the end of the first paragraph, are we asked if Home Alone would be different if it were set in Alton, Ill., instead of New York City? Home Alone was not set in the Big Apple. It was set much closer to Alton, actually, because it's supposed to unfold in a Chicago suburb. The Home Alone sequel was set in NYC, which is why its full title is Home Alone 2: Lost in New York. 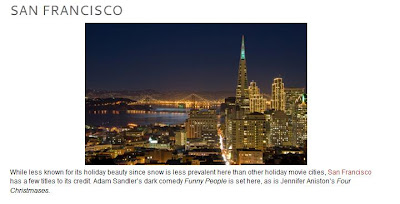 After mentioning Chicago and New York City, CityPASS heads west to discuss one of my favorite places, San Francisco. Four Christmases was indeed set in the City by the Bay, but, oops, it did not star Jennifer Aniston. The leading lady in that 2008 film was Reese Witherspoon. Witherspoon played Aniston's younger sister on a couple of episodes of Friends — and the two are friends in real life — but that's about as close as these actresses come to being one in the same. It seems you'd have to be as bumbling as the crooks from the first two Home Alone films to mix up two of Hollywood's biggest stars. 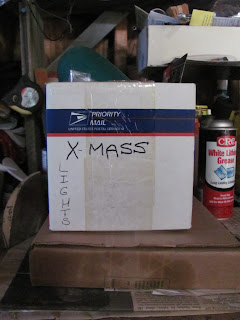 In the back of my parents' garage, it's beginning to look a lot like what? Most folks who celebrate Christmas have boxes of Xmas lights. Not my parents.

The abbreviated Xmas is an informal term for Christmas. It's assimilated into the English language to the extent that it even appears in the Oxford English and Merriam-Webster's dictionaries. As the dictionaries explain, the X is the symbol for Christ, from the Greek letter chi (X), initial of Christos Christ.

Use an X for Christ, add the last three letters from Christmas and, voila, you've got Xmas. What you don't want to do is include an additional s. The shorthand term has nothing to do with mass, the (often-capitalized) religious service.

Mele Kalikimaka to all my readers!
Posted by Owen at 8:00 AM 1 comment: 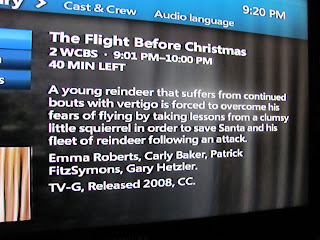 We all have our holiday traditions. One of my favorites is driving around local Connecticut neighborhoods with my good friend Abby to check out Christmas lights. During our annual December drive, we come across a variety of displays. Some houses are lighted and trimmed in a way that would make Clark W. Griswold proud; others look like the family pet did the decorating. Some houses are awe-inspiring; others are awful. Beauty is in the eye of the beholder, of course. In a sense, holiday displays are works of art, and, for one day, Abby and I are art critics. It's exhausting work. Builds up quite an appetite, too, which is why we pick up food — pizza and, because Abby admirably attempts to get more veggies into my life, salad in 2011 — after our holly, jolly drive-bys and head back to Abby's house to relax and watch a movie. This year we saw The Debt, starring Helen Mirren. We both give it a thumbs-up, though the end left us wanting a bit more. Turns out we're art critics and movie critics.

Before we settled on The Debt and settled in for a long winter's movie night (113 minutes, to be exact), a channel-surfing Abby spotted the squirrelly material seen here. She almost choked on her garden salad trying to notify me of the misspelling. Thanks, Abby, for finding an error — and for not choking. 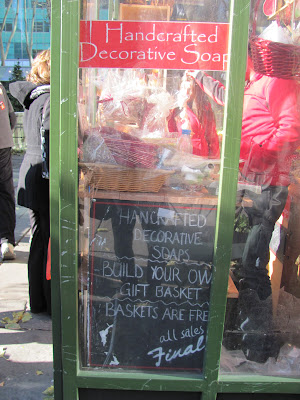 Yesterday, my family did some holiday shopping at an open-air market in midtown Manhattan known as "The Holiday Shops at Bryant Park," which the official Bryant Park website describes as "custom-designed jewel box kiosks." My mom searched for her standard items: hats, jewelry, ornaments and the like. My brother kept an eye out for food and drink. I, of course, was on the lookout for typos. I am happy to report that all members of our traveling party found what they were looking for.

While standing near the kiosk for Scent in a Basket, which sells handcrafted decorative soaps, and doing my best to stay warm (temps in the low 30s), I spotted this sign. When I pointed out the top line on the chalkboard to my brother, he joked, "Are you going to write about how the soaps are crafted by Han Solo?" Why yes, Bro, I am.

Spelled with a d, as the red sign at the top shows, handcrafted means crafted, or made, by hand. Take away the d, however, and we can justifiably come to the conclusion that Han fashioned the items when he wasn't busy piloting the Millennium Falcon or battling the Empire.

May the d be with you the next time you put chalk to board at your custom-designed jewel box kiosk, Scent in a Basket.

Nothing to Write Holmes About

About five minutes into the 2009 movie Sherlock Holmes, after Holmes and Watson have foiled a murder by Lord Blackwood, a photographer takes a photo to capture the moment, and the photo segues into the front page of a newspaper called The Penny Illustrated Paper.


SCOTLAND YARD CATCHES KILLER!
How did Scotland Yard manage to do so? Well, check out the deck. "Sherlock Holmes Aides Police," we are informed.
Really?
Aids police is more like it. An aide (noun) aids (verb) others. Had the writer at The Penny Illustrated Paper done just a wee bit of detective work, he would have discovered this. 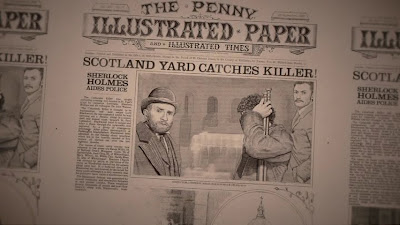 Where Did U Go?

Looking for a college for your son or daughter? You may want to consider Purdue University, which came in at No. 96 on Forbes' list of "The Top 100 Best Buy Colleges."

The university, located in West Lafayette, Indiana, is renowned for its aerospace engineering program. It does not, however, offer a major in Poultry Science, despite what Forbes may lead you to believe.

A reader named John from San Jose, California, sent me this image. He was looking at the special report with his daughter, who noticed Forbes' flub. Did you spot it? 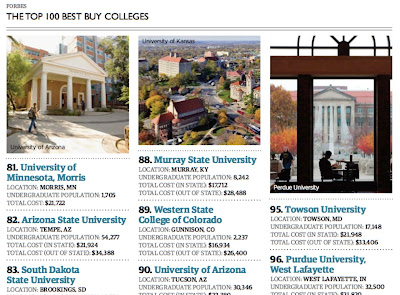 Take a look at the photo label on the far right. Perdue University? Forbes has confused the university with the famous chicken company. A rather birdbrained misspelling, I'd say.

Thanks to John for sending me this typo. If you see any worthy errors, readers, seize the opportunity and send 'em my way. Don't be chicken!
Posted by Owen at 8:00 AM 3 comments:

The Future Is Here 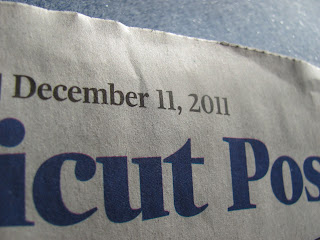 My closest friends are well aware that a certain '80s classic about a teenager and a "crazy, wild-eyed scientist" is my favorite movie, hands down. Even casual acquaintances figure out rather quickly that I love Back to the Future, as can most people who are in my vicinity whenever my text-message ring tone is triggered.

Why is this "power of love" so strong? Is it because the film was unlike anything I had ever seen — and have ever seen since? Is it because of Michael J. Fox's terrific performance? (A bit of trivia: The role of Marty McFly originally went to Eric Stoltz, who shot weeks of footage before being replaced.) Is it because the smash hit is an enjoyable mix of genres, including comedy, drama, adventure and sci-fi?

Nah. It's because one of my hobbies is time traveling. What, you don't believe me? Fine, what is today's date? December 9, 2011. Now, take a gander at the date of the Connecticut Post newspaper I read today. That's right, it's two days from now. I took my DeLorean out for a little spin this morning, reached 88 miles per hour and, well, you know.

You'll be relieved to learn that I didn't run into my future self on the 11th, nor did I disrupt the space-time continuum. I did, however, watch the Colts-Ravens NFL game. SPOILER ALERT: The Ravens win. Now, how could I possibly know that if I didn't travel two days into the future? I also now know all about the incredible Dec. 11 story that garners front-page headlines, but I don't want to spoil things. You'll hear all about it in a couple of days. 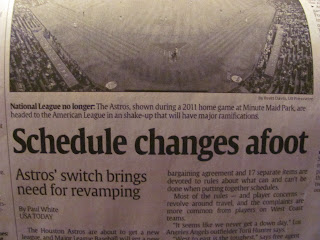 The error in today's post should be easy to spot. The photo caption notifies us of "an shake-up" in professional baseball. I have "an problem" with this one.

It's not an egregious error, but when I saw it, I knew it afforded me the opportunity to discuss a similar item I see — and hear — from time to time: "an historic."

It's an honest mistake but a horrific one. (Note the correct usage of articles in that last sentence!)
Posted by Owen at 8:00 AM No comments: 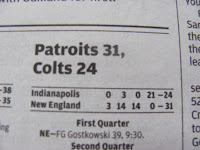 You have to feel for the Colts. With superstar Peyton Manning sidelined with a neck injury, the team is off to an unsightly 0-12 start this season. Indianapolis is so inept without its longtime quarterback that last Sunday the team found a way to lose to a make-believe opponent. I can understand losing to the Patriots, a first-place team with Tom Brady at the helm. But to fall to the Patroits? I know Colts stands for "count on losing this Sunday," but this is extreme. 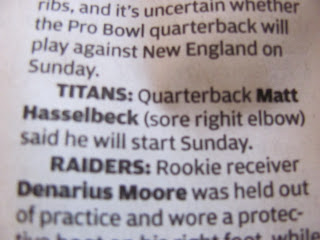 I'm no doctor — nor do I play one on TV — but I'd venture to guess that Matt Hasselbeck's right elbow is sore because he has something imbedded in it. Some outpatient surgery can fix that. The procedure involves a quick tap of the "delete" key. Do that, and Hasselbeck should be good to go for Sunday's game.
Posted by Owen at 8:00 AM No comments: 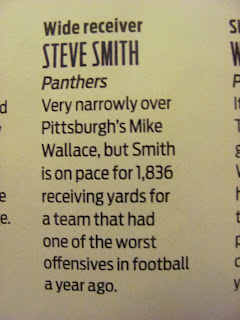 Wide receiver Steve Smith plays for the Carolina Panthers. Carolina has trouble scoring. Its offense, in a sense, is offensive. So is using the word offensives instead of offenses.

The best defense against improper word usage? A good offense, of course.
Posted by Owen at 8:00 AM No comments:

A Slap in the Face 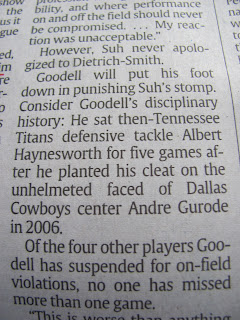 Did anybody catch Ndamukong Suh of the Detroit Lions stomp on a fallen Green Bay Packers player on Thanksgiving Day? Suh was suspended two games for his actions. That's not enough in my opinion, but that's an argument for another day. Suh's disgraceful stomp reminded many, including the writer of this USA Today article, of a 2006 NFL incident in which Albert Haynesworth stepped on Andre Gurode.

It was at that point in the article that today's typo was staring me in the face. Let's face it: Faced has an unwelcome d. That makes me mad, though my anger will never reach a certain player's Suh-distic level. I prefer to release my anger into the ether via a blog post originating in Connecticut, my stomping ground.