My friend Lindsay, of IAMNOTASTALKER, visited her parents over the holiday weekend. While Lindsay and her familial crew were on a, um, march toward the Palm Springs Art Museum four days ago, her mom spotted the sign shown below and knew something, ahem, may be wrong. Lindsay, the good friend that she is, snapped a photo for me. Her husband read the sign twice and couldn't figure out why she was taking a picture. Can you? 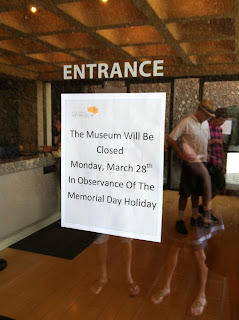 Memorial Day, a day to remember and honor all our brave men and women who have died while serving in the U.S. Armed Forces, is traditionally observed on the last Monday of May.

That's not what I'm observing on this museum sign, which exhibits some unusual information.

What's going on out in California? Memorial Day is in March? Is St. Patrick's Day in May? And what about the Fourth of July? I suppose that's celebrated in June.

Lindsay's mom joked that Californians celebrate Memorial Day twice. On the West Coast, it seems, the federal holiday once known as Decoration Day marks the unofficial start of the summer season and the spring season.

If we're allowed to double up on our holidays, I'm formally requesting that Congress officially recognize a pair of Thanksgivings — one in February and one in November. But I'm drawing the line at pushing for a semiannual celebration of my birthday. I'm getting too old too fast as it is.
Posted by Owen at 8:00 AM 5 comments:

Nothing Remains Quite the Same 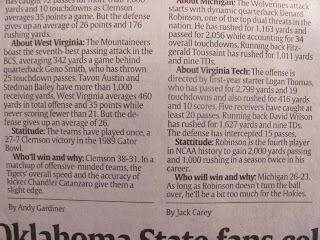 The "Parrotheads" reading today's post know all about "changes in latitudes" and "changes in attitudes," courtesy of singer Jimmy Buffett. But even they would be hard-pressed to believe that Buffett's 1977 album or its eponymous hit song inspired the USA Today to introduce changes in "statitude."

I am not against using an invented term as a boldfaced lead-in in this breakdown of college football bowl games. It plays off the idea of sports statistics. That's fine. What's not fine, however, is that the word is spelled differently within the section. For the Orange Bowl breakdown on the left, it's statitude; for the Sugar Bowl breakdown on the right, it's stattitude. (In the same vein, I'm not entirely sure why the bottom lead-in switches from "Who'll win and why" to "Who will win and why.") Consistency counts, people. If you're going to create a word, the least you can do is spellulate.

Spellulate v (2012) : to spell a concocted term the same way at all times 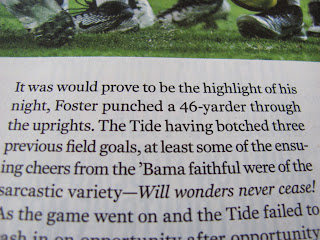 I'm not sure how this happened. Maybe the writer decided to text his article to the office and pressed a few incorrect keys on his phone, creating some "Word" mode confusion. We've all been there. You try typing a certain word on your phone, but the auto-correct feature replaces it with a nonsensical substitute. So, instead of a friend finding out that you just saw Jennifer Aniston, he learns that you just saw Jennifer Angst. Or, though you intended to text about a "slip of the tongue," you fail to hit that 3 key one final time, and the recipient reads about your "slip of the vomit."
Posted by Owen at 8:00 AM No comments:

At Large in Atlanta

It slipped my gaze during last month's Kentucky-Kansas blue-blood showdown in the NCAA men's basketball championship, despite its large, light-emitting presence. Yet there it was, on the rotating scoreboard along the sideline, for all to see: a notification that next year's Final Four will take place in ... Alanta.

I was rooting against Kentucky, and I had no doubt the Wildcats would win, so I wasn't fixated on the April 2 game. I learned about the Final Four flub from my mother, who happened to catch it on a Yahoo! Sports college basketball blog the day after Kentucky's 67-59 victory. Thanks, Mom!

It's safe to say that those who were focused on the game didn't need eyes like a Hawk to notice that Georgia's capital was missing a letter. This typo is akin to something out of a bad Dream. It drips with irony, too, because it occurred at an event featuring student-athletes. Are you Falcon kidding me? That t needs to be on board — literally. What if that wasn't the only t that went missing? What if we were Brave enough to take a t out of some major companies whose headquarters are in Atlanta? We'd have Turner Broadcasing, Home Depo and Dela Air Lines, among others. (If you know your Atlanta-based pro sports franchises, this paragraph makes sense. If you don't, your loss!)

Of course, I take this all back if the 2013 Final Four is going to be held in Alanta, a small town in east-central Lithuania. Somehow, I doubt that's the case.
Posted by Owen at 8:00 AM No comments:

Oh, the confusion that can be caused by the simple misplacement of a three-letter prefix. The SIGNATURE WINS blurb is about college basketball teams needing to have wins against quality opponents outside their conference on their resumes. Problem is, the writer put non- in front of the wrong word and, in doing so, created nonsense.

Teams need victories against "strong non-conference opponents," not "non-strong conference opponents." I doubt any number of victories, even of the blowout variety, against weak teams in one's own conference will do much good when "Selection Sunday" rolls around for the NCAA tournament. But maybe I'm just a nonbeliever.
Posted by Owen at 8:00 AM No comments: 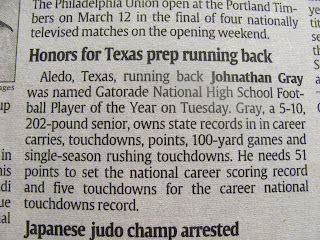 Take in out, please. The first in. The second in. It doesn't really matter which to me. I just don't want to see in and then see in again. Let me repeat: Don't repeat in in that sentence. It's inaccurate. Indeed. 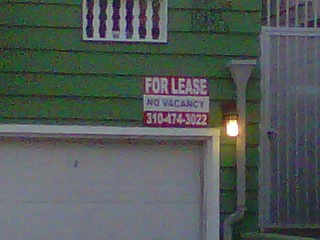 Looking for a place in Los Angeles? You're in luck. That sign's top line lets us know that one if not more of the apartments in this triplex is unoccupied. I wonder if it has ample closet space. I wonder if the appliances are new. I wonder if pets are allowed. I wonder ... oh, hold on. That second line points out that no empty apartments are available.

What the heck is going on?

My friend Lindsay, of IAMNOTASTALKER, noticed this complex's self-contradictory sign, which you can also see on Google Maps here. Click "street view" and zoom in for another look at incongruity at its best. We have a vacancy, all right — a vacancy in the cranium of this sign's creator. 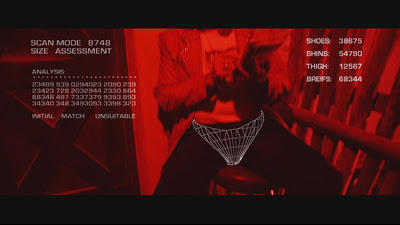 I had to swallow my pride to pen today's post. You see, I spotted the two errors before you in the communigator, a magazine published biannually by the University of Florida's College of Journalism and Communications. That's my alma mater. That's my college.

Turns out, the editors at the communigator could have used this Gator's assistance.

Both mistakes occurred in the "Alumni of Distinction" portion of the "On the Record" section. Contrary to what you see above, Darrell Hammond was once a regular cast member on Saturday Night Live. He was never a "case member." Most of my readers probably caught that typo.

I'm betting most of you did not catch the second slip. Danny's last name is spelled incorrectly. Weurffel should be Wuerffel. It's an unusual name, a difficult name — for those who aren't true Gators. Anyone associated with UF who misspells the name of the most accomplished passer in school history should be tossed overboard into swampy, alligator-infested waters. Too harsh? Eh, just a tad. (Sorry, Tebow worshippers, but I place Wuerffel atop the best-passer-in-school-history list, and it's not even a close call.)

This post notwithstanding, I am proud to be a College of Journalism and Communications graduate from the University of Florida. I'm one of many. Some of the greater Gators you may have even heard of. In addition to Hammond and Wuerffel, we have...

Before I go, I have to wish the hap-hap-happiest of birthdays to the biggest Danny Wuerffel fan I know, my younger brother. Happy birthday, Paul! May your year be filled with as many great moments as DW gave to us during that memorable 1996 season!
Posted by Owen at 8:00 AM 2 comments:

Thanks, Paul, for spotting this "capital offense" and giving me a heads-up. That was mighty big of you — almost as big as the C in Cincinnati.
Posted by Owen at 8:00 AM No comments:

I'm Looking for Somebody

In 1981, the British rock group Queen put out an album called Greatest Hits. I own it. I love it. What I don't love, though, is one of the typos I see each time I flip over my CD's case — and I'm not talking about the missing hyphen in "Fat Bottomed Girls." I'm referring to the title of Track 10. What happened to the e, Queen?

In "We Are the Champions," Freddie Mercury sings, "And bad mistakes, I've made a few." This is one of 'em, Freddie. You're not directly responsible for the spelling error, of course, but you're the lead singer of the band, so you must take the hat. Oh, sorry, I left out the e. I meant, take the heat.

And to think: All you needed was a crazy little thing called a dictionary. 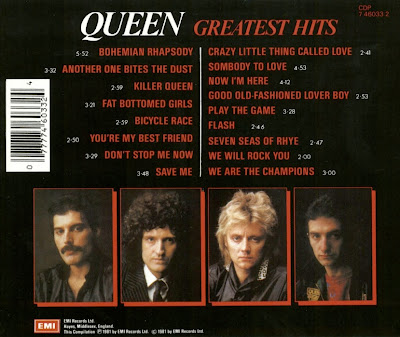