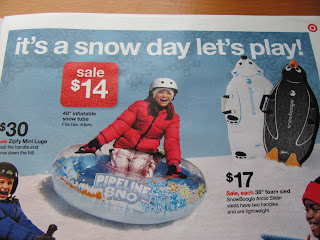 Sunday paper just arrived, chock full of inserts. The Target flyer had the six words you see here atop one of its pages. Now, I get it — advertisers and advertisements are less restrained by the rules of spelling and grammar than, say, a copy editor at a magazine. They have the freedom to be creative. That's fine. But creativity and readability are not mutually exclusive. So, even though I'll let it slide that the good folks at Target decided not to capitalize the first word, I will throw a big, tightly-packed snowball at them for not putting a punctuation mark between the fourth and fifth words. Try reading those six words. There is a natural pause. Well, there should be. But where is the period after day? Heck, I'd settle for a comma or a dash. Something.