Today, readers, the Christophe Choo Real Estate Group is taking us on a helicopter tour of the most exclusive, expensive estates in Beverly Hills, Bel Air and Holmby Hills. We’ll be getting bird’s-eye views of mansions, manors and other high-end luxury real estate. Strap in and press your noses against the cabin windows. You’ll want to get a good look-see at these amazing properties.

Our first stop, just over a minute into the tour, is the William Randolph Hearst estate in plush Beverly Hills. 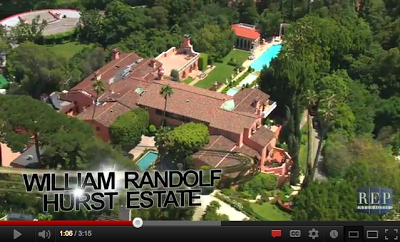 Hearst, a publishing magnate in the late 19th and early 20th centuries, moved into the gated hilltop estate in 1946 and lived there until his death in 1951. The property, which includes an H-shaped mansion, three swimming pools, a nightclub, lighted tennis court, guest house and security cottage, was a filming location for The Godfather, The Jerk, Fletch and The Bodyguard, among other productions. According to Hearst Over Hollywood by Louis Pizzitola, it’s where John F. and Jacqueline B. Kennedy spent a portion of their 1953 honeymoon. The impeccably manicured estate was on the market in 2007 for $165 million. It didn’t sell. A few years later — and minus a few acres — it could be had again, this time for the bargain price of $95 million.

When Hearst owned the New York Journal in the latter stages of the 19th century, he was pitted against Joseph Pulitzer (and New York World) in a circulation war. This bitter battle is seen as the launching point of yellow journalism, the act of sensationalizing stories and exaggerating real events in an effort to sell more papers. Yellow journalism is named after the Yellow Kid, a character in Hogan’s Alley, a comic strip that ran in New York World and then New York Journal.

Today’s tour includes some attention-grabbing tactics of its own. Yellow journalism has colored this whirlybird trip. William Randolph Hearst’s identity has been sensationally distorted.

Who the heck is this mysterious William Randolf Hurst? He must be a new (yellow) kid on the block.

First, I must phind phault with the spelling of the middle name. Ph and f may have phonetic (fonetic?) similarities, but they are not interchangeable. Would you rather be fat or phat? Did you answer fat? Pfft! So, take that f off the end of Randolf. We need to get back to basics. More specifically, we need to get more basic, by climbing higher on the pH scale. Right now, that last name has a pH level — to be more precise, a ph level — of 0. That’s much too acidic for my blood. Let’s raise its ph level to 1.

Next, and it pains me to say this, Hurst is damaged. Hurry along, hur. You belong in a hearse. We need hear here. Hear! Hear!

This YouTube video — and its aerial error — made its vertical landing whilst I read a post on my friend Lindsay’s filming-locations blog, IAMNOTASTALKER. You can watch the 2010 video, which was uploaded by REP Interactive, below.