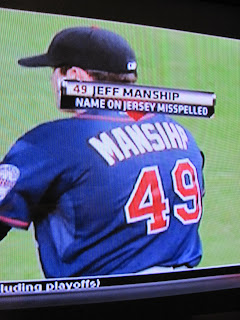 Ironic, isn't it, that Jeff's surname contains the letters needed to spell mishap? You can't keep a good Manship down, however. He made a name for himself against the Royals, pitching one scoreless inning of relief in Minnesota's 4-2 victory. That name is Manship.
Posted by Owen at 8:00 AM