Catching an Error While Catching Passes

Xbox 360? PS3? Wii? Not for me. I'm old-school. If I get a hankering to play a video game, I'll plug in my vintage Sega Genesis console and play a sports game — a 16-bit game with simple graphics and simple player control. One of the regulars in my rotation is Tecmo Super Bowl. It's fun to play in full-season mode and keep tabs on the league leaders. I run a pass-happy offense, so my receivers are usually atop the leader boards. What I am not happy about, however, is that each time I check in to see if my go-to wide receiver leads the NFL in receptions, I come face to face with a spelling error. 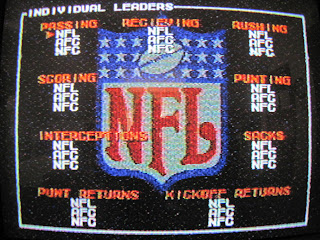 Those pixelated letters at the top center of the screen are, like a 20-yard field goal in a domed stadium, hard to miss. I'm forced to check the recieving leaders.

Tecmo is a Japanese company and English isn't the native language of its video-game developers, so I can almost overlook the mistake. Having said that, I see receive spelled incorrectly often, and I shouldn't have to. Remember, readers: i before e except after c.

Back to the game. I have a feeling Michael Irvin is going to have a big day against the New York Giants.

Mele Kalikimaka to all my readers!
Posted by Owen at 8:00 AM