One for the Thumb 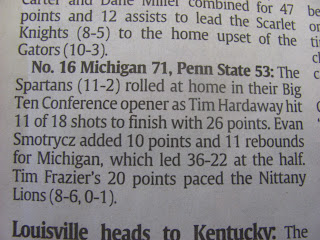 College sports fans can be passionate. Very passionate. I know. I am one of them. Want to get a rise out of me? Mistakenly refer to my alma mater, the University of Florida, as Florida State University, or erroneously state that its nickname is Seminoles. I know Auburn and Alabama fans can relate, and I'm guessing the same goes for Michigan and Michigan State. Both schools are located in the Great Lakes State. Both play in the Big Ten Conference. (Which has 12 schools. Go figure.) Both are public universities founded in the 19th century. Both have more than 40,000 students. Despite these similarities — and despite the schools' proximity (about 50 miles) — on certain matters these rivals couldn't be further apart.

Some Michiganders proudly wear maize and blue, Michigan's colors. Others sport Michigan State's green and white. Want to make them both see red, though? Call a Michigan State Spartan a Michigan Wolverine, or vice versa. That's what this USA Today writer did. The Wolverines, not the Spartans, defeated Penn State.

The state's Lower Peninsula, where both universities are located, is shaped like a mitten. An eastern portion of this region resembles a thumb and is known as — duh — the Thumb. I'm guessing any Wolverines who read this USA Today article wanted to give the writer the finger.
Posted by Owen at 8:00 AM