An S Will Aid Us

Say what? Said is in need of first-aid treatment, for its first letter has been severed. The s has gone the way of the dodo. The less said about this "said with less," the better. Having said that... 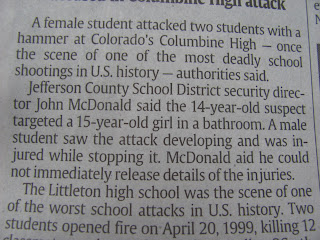 Words that end in -aid need their first letter. Otherwise, meaning is lost.

The aid aid she aid for the can of aid.

What the heck does that mean? When we include those pesky initial letters, the mystery is solved.

The maid said she paid for the can of Raid.

Along the same lines, s-words sans the s's can result in quite the mixed message.

The lumbering man who lived in pain was killed with words.

That is grammatically correct, and it makes some sense, I suppose. It'd make more sense, however, if we put those s's back where they belong.

The slumbering man who lived in Spain was skilled with swords.

What a difference an s (or two or three) makes.