Want to travel near the coast, in a state known for its warm, sunny weather? Want to stay at an architecturally stunning hotel built in the 1920s? Want to remain close to Hollywood? Want the hotel to have presidential and World War II ties? Want the hotel to have been used as a filming location for a Will Smith movie? “Let’s stay at the Biltmore Hotel,” you say. Say more. That line won’t suffice. Two Biltmore hotels exist that meet all those requirements — one in California, one in Florida.

The Californian Biltmore, known officially as the Millennium Biltmore Hotel, opened in downtown Los Angeles in October 1923 and was the largest hotel west of Chicago. The 683-room hotel has hosted eight Academy Awards ceremonies, and during World War II it served as a military rest and recreation facility. Senator John F. Kennedy used it as campaign headquarters in 1960. Scenes from Independence Day were filmed there.

The Floridian Biltmore opened next to an 18-hole golf course in January 1926 and was the tallest building in the state. The 275-room part-palazzo, part-castle has the largest hotel pool in the continental United States, and during World War II the hotel served as a hospital. President Obama spoke there during a 2012 campaign stop. Portions of Bad Boys were shot there.

When the L.A.-based Biltmore opened to “Host of the Coast” fanfare in the early ‘20s, did architects stop working? No, they built more Biltmores. The Biltmore in Coral Gables, a city southwest of Miami, opened three years later. More than 2,740 driving miles (or 2,330 miles, as the crow flies) separate the two hotels. Someone, it seems, failed to give Flavorwire this wake-up call. 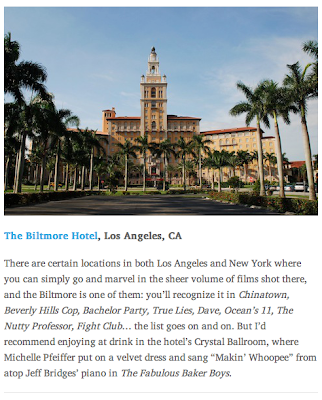 My friend Lindsay, of IAMNOTASTALKER, was reading a Flavorwire article about 50 trips every movie fan should take when she had some reservations about the photo accompanying the Biltmore entry.

No need to light up a candle and show Lindsay the way. She knew that building, with its Italian and Spanish influences, wasn’t the Hotel California. It’s a lovely place with a lovely face, sure, but you can’t find it here, any time of year — here being Los Angeles. The pictured hotel, like the voices that wake you up in the middle of the night, is far away. Flavorwire got its wires crossed, writing about the Biltmore in L.A. but showing the Biltmore 2,000-plus miles away.

I must credit Flavorwire, which isn’t programmed to deceive, for recognizing its mistake and making the necessary repairs. Now, when you check in to the website’s article about 50 must-see places, you can check out a rebuilt Biltmore. 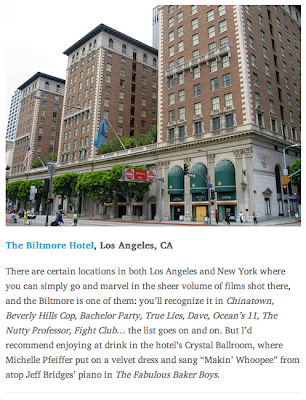 Oh, by the way, should you have a thirst for pink champagne on ice, I’d recommend enjoying “a drink,” not “at drink,” in the Biltmore’s Crystal Ballroom, where the Academy of Motion Picture Arts and Sciences was founded during a banquet in 1927.
Posted by Owen at 8:00 AM