What You Talkin' 'Bout, Willis?

Cleveland could advance to the Super Bowl this season, though history suggests otherwise. The Browns, an NFL doormat of sorts, haven’t made the playoffs in more than a decade and are one of only four current teams never to play in the NFL’s title game.* (The Detroit Lions, Jacksonville Jaguars and Houston Texans are the others.) Still, anything is possible. Check that. I know of one scenario that is not possible: a Cleveland-Denver Super Bowl. 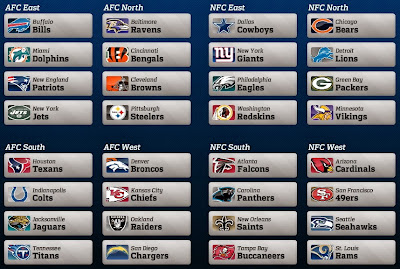 Cleveland is an AFC team. So is Denver. As such, the ultimate Browns-Broncos brawl would have to take place in the AFC Championship Game, for a spot in the Super Bowl. 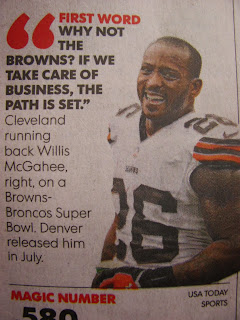 Running back Willis McGahee played for Denver in 2012, but he suffered a season-ending knee injury that November, and the Broncos released him the following June — not July, as the blurb states. (Professional football is a cutthroat, bottom-line business.) Three months later, McGahee signed with Cleveland. In a recent interview with USA Today, the two-time Pro Bowl player pondered the possibilities of his new team, surprisingly tied for first place in its division at the time, crossing paths with his old team in the playoffs — but not in the Super Bowl.

Cleveland battling Denver for possession of the Vince Lombardi Trophy would be a dream Super Bowl matchup in every sense of the word dream. Even my beloved Dallas Cowboys, from the NFC, have a better shot of facing the Broncos in Super Bowl XLVIII this season.


* The Browns are an expansion team that began in 1999. The original Cleveland Browns franchise, which went to three AFC Championships (losing all of them to, ironically enough, Denver), became the Baltimore Ravens in 1996. The Ravens have played in — and won — two Super Bowls.
Posted by Owen at 8:00 AM