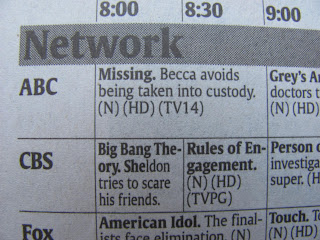 Sheldon’s roommate, Leonard, once complained that he hated his name because, when said aloud, “it has 'nerd' in it.” I suppose Sheldon has a right to bitch now too, because his name, when written in these TV listings, has prominent lady parts.

Sheldon doesn’t have a bold bone in his bony body. He’s afraid of birds, has a fear of nets and has nightmares about Goofy. He won’t talk about any of these phobias in public, mind you, because he doesn’t like speaking to large crowds, which he considers any group big enough to trample him to death. General rule of thumb is 36 adults or 70 children. Sheldon? Bold? No.

Why is She acting like that? He has no interest in getting in touch with his feminine side.

Making those first three letters stand out, however, was anything but a bold feat. Not that Sheldon would notice; he is oblivious to advances from the opposite sex.