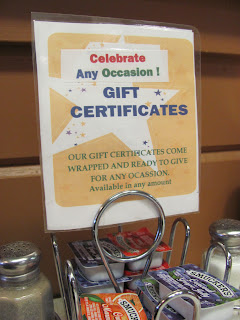 Occasion isn't the easiest word to spell. Some think it has two c's and one s. (Those folks are correct.) Others believe it has one c and two s's. Still others maintain that it has two c's and two s's. Seeing it spelled incorrectly, therefore, isn't too surprising. Or so I thought. It is surprising to find it spelled two different ways — one right, one wrong — on the same laminated advertisement, which is what happened when I was at Johnny's Diner in Fairfield, Connecticut, recently.

Oh, Johnny, you weren't good. Occasion makes up 9.5 percent (two of the 21 words) of your sign. Is it asking too much to spell it correctly in both spots? Heck, I think it would have been preferable to misspell it twice; at least you would have been consistent.

Johnny's Diner does have its share of tasty dishes, including the grilled chicken sandwich on a Portuguese roll that I had on this visit. That's why I eat there. Occasionally.