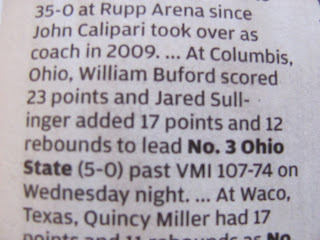 Ohio State defeated VMI in what city? I didn't attend the 33-point blowout, but I'm fairly confident the game was played in Columbus, Ohio — the capital of the Buckeye State and home to Ohio State University. The state's largest city, which was founded in 1812, was named for explorer Christopher Columbus. In 1492, Columbus sailed the ocean blue. In 2011, the Connecticut Post blew it.