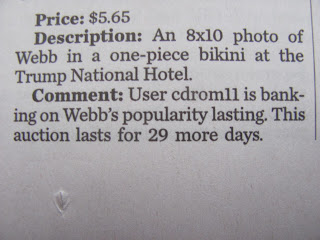 A skimpy bikini could be a conversation piece, because of its revealing pieces. That’s pieces, with an s. You see, it takes two to make a bikini. Two pieces.

Let’s look at this from top to bottom. On top, we’ve got, um, the bikini top, which covers the breasts. At bottom, we’ve got, er, the bikini bottom, which conceals (sometimes not so well) the groin and the buttocks.

Now take a gander at the image above. Something doesn’t (bathing) suit me. Katherine Webb donned a “one-piece bikini”? How is that possible? If Katherine is wearing a “one-piece bikini,” which piece is it? The top? The bottom? May I see the photo? Barring visual proof, I’m going to have to conduct piece talks with the writer. Negotiations may become heated, and I won’t be at peace until he removes one-piece.


Bi is a prefix meaning two, so a bikini consists of two kinis. Kidding. The term bikini was coined in 1946 and is named for Bikini Atoll, a group of islands within the Marshall Islands where the U.S. conducted nuclear tests after World War II. The introduction of the bathing suit, with its risqué style, is said to have created the same shock as the nuclear bombing. But that doesn’t change things “atoll.” Despite what you may find elsewhere on the Internet, a “one-piece bikini” does not exist. It can’t, by definition. A bikini is a two-piece bathing suit. A bikini is bisectional. The instant you connect the top and bottom sections, the bikini, as we know it, ceases to exist. Call it something else. Call it a bathing suit or, if you want to be trendy, a “monokini.” The latter term is a bit misguided, knowing what we know now about bikini’s etymology, but at least it recognizes the amalgam of a one-piece suit and a bikini.

Before blogging about Webb’s “one-piece bikini,” I ran it by my fashionable friend Lindsay, of IAMNOTASTALKER. She agreed that it made no sense and urged me to pen today’s post. I showed her the photo above, and she wrote, “I would never refer to that type of suit as a one-piece bikini.”