All the Wrong Moves 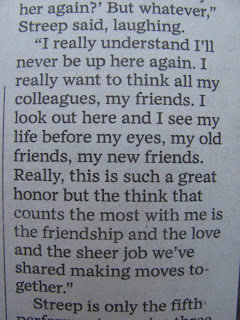 Allow the image at right to serve as your teleprompter, readers. It shows an excerpt from the speech Meryl Streep gave after winning a best-actress Oscar for her performance in The Iron Lady. I don't know who transcribed this Academy Awards speech, but, oh, Mamma Mia!

In the span of four sentences, I count more errors (four) than Meryl Streep has Oscars (three).

The think-thing switcheroo isn't the only error in the last sentence. I take no pleasure (OK, maybe a little) in announcing that someone did a job on it, taking all the joy out of it. Plus, Meryl Streep has made her fair share of classic movies, to be sure (The Deer Hunter, Kramer vs. Kramer, Out of Africa and Julie & Julia, to name a few), but I had no idea this living legend could bust a move. I'll have to YouTube it.
Posted by Owen at 8:00 AM