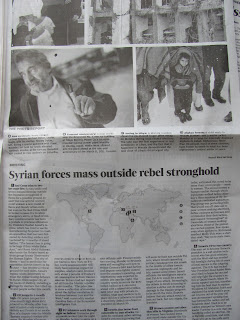 Each issue of the Connecticut Post used to contain a "Nation & World" page that included four photos at the top (labeled A–D) and six short articles at the bottom (numbered 1–6). A world map near the middle of the page included the corresponding letters (in small circles) and numbers (in small boxes). The letters and numbers were placed on the map according to where the photo was taken or the story took place. In the accompanying images, for example, news brief No. 3 details Greece's financial woes, and No. 5 is about an anti-abortion protest in Virginia.

So, looking at this map, it stands to reason that the four photos were taken somewhere in the North Pacific Ocean, close to the imaginary International Date Line. Perhaps something happened on the Marshall Islands. Maybe a shark was trapped in the "garbage patch" of marine debris concentrated in the North Pacific. This isn't the case, of course. The Connecticut Post editor simply failed to place the A–D photo labels once the photos had been selected. 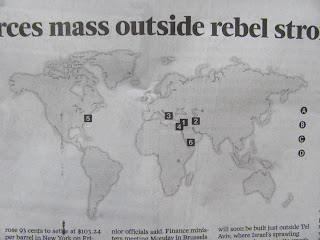 Allow me to put these photos on the map — literally. Label "A" goes near Rome, "B" in Tokyo, "C" in Libya and "D" in Kabul, Afghanistan. 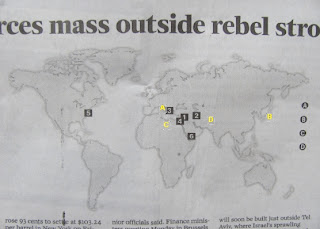