A Good Year to Die Hard

July, not December, may have been the most wonderful time of the year in 1988, because that’s when John McClane first traveled from New York to L.A. to visit his estranged wife, only to become knee-deep in holiday hell on the 30th floor of the Nakatomi building. 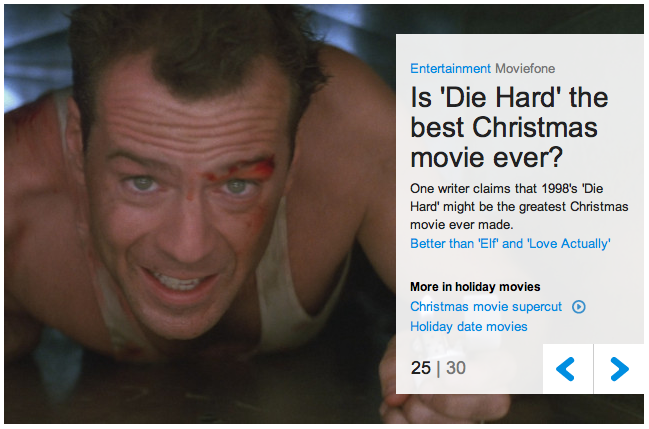 Take a long, Die Hard look at the teaser for a Moviefone article about the crème de la Christmas crème. To borrow a line from a popular carol: Do you see what I see? That bad date needs to undergo a digital revolution. An 8 took off faster than a woman under the mistletoe when I approach.

Don’t dress your movie date to the nines. You may think she looks sexy, but all I see is an ugly Christmas sweater. That second 9, in true McClane fashion, is a fly in the ointment, the monkey in the wrench, the pain in the ass.

In the spirit of the season, I’d like to present my lists of favorite Christmas movies (i.e., joy to the world, good will toward men) and favorite movies set at Christmas (i.e., blow up the world, kill bad men). Enjoy.

Merry Christmas to all, and to all a yippee-ki-yay…