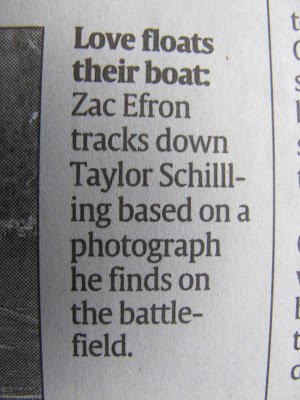 Our streak of bad l-l-luck begins on the fifth line, where I was asked to track down a lofty lowercase letter. It had come to my attention that there was an l floating around here somewhere.

Wait, it’s over there.

No, it’s over there.

What the l is going on?

The l’s swelled. An extra one — The Unlucky One — is chilling in Schilling. The actress’ last name was Taylor-made for twin l’s, but someone tripped up and fashioned triplets.

When it came to spelling Schilling, the caption writer missed the boat. That’s my two cents’ worth. Actually, that’s my 12 pence worth.