Lordy, lordy, look who’s turning forty … into an imaginary number and imaginary word, simultaneously. In “The Little Jerry,” a Seinfeld episode that aired in the sitcom’s eighth season, the eponymous star bounced a check — one festooned with a clown holding balloons — at a local bodega. Big Jerry made a little mistake, and I’m not talking about the shortage of funds that led the market’s owner, Marcelino, to tape the check on the cash register. 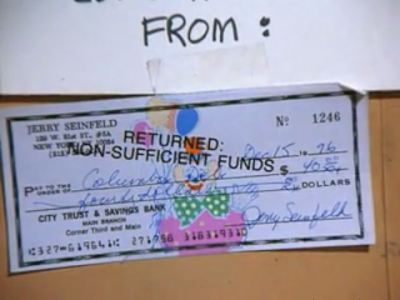 Check out check No. 1246. See the mistake? It, like Jerry’s jerry-built check, is on display.

At first glance, there appears to be no funny business, big-bow-tied clown notwithstanding. Wait a second! On the DOLLARS line, the third letter came forth out of nowhere. That u is a fifth wheel, and one need not possess a sixth sense to come to the same conclusion.

Jerry didn’t write forty; his cursive word, like many middle-aged folks, is fortyish.


Jerry’s check is in the amount of fourty dollars, which makes zero sense. Spelling forty isn’t Jerry’s forte. Fortunately for him, I’m here to help. I’ve always spelled forty with ease; it’s never been a problem for me. What? Too arrogant? I can’t suppress my forty ‘tude.

The comedian’s confusion is understandable. Forty relates to the word four, yet it drops the u, while fourteen, another four-matted word, keeps it. Perhaps it’d make more sense to spell 40 with a u and use the u-less form as an adjective meaning fort-like. Example: When I was fourty, I built a forty tree house for my sons.

To muddy the issue even more, no uniformity exists for the spelling of multiples of ten. We have sixty and seventy, so one could surmise we’d also have threety and fourty. If nine times ten is ninety, shouldn’t five times ten be fivety?

Nevertheless, Jerry should not have cut this erroneous check. Even a fourth-grader knows forty forgoes a u. Looking back, it’s hard to believe that nobody on the Seinfeld crew spotted the error.

Then again, hindsight is twoty-twoty.
Posted by Owen at 8:00 AM