The Headline Was No-Go

Today's post is about an error that appeared in a newspaper more than a year ago, but it's such a classic — an above-the-fold misspelling of a city name in large, bold letters — that I couldn't resist revisiting it.

NFL fans reading this will recall that last season the Green Bay Packers faced the rival Chicago Bears at Soldier Field in Chicago in the NFC Championship Game. In its preview of the big game, the Green Bay Press-Gazette made a glaring error front and center on page A-1. 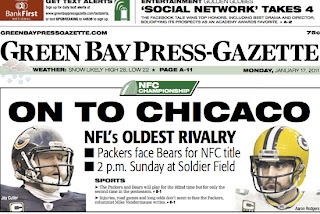 I've got to hand it to the folks at the Press-Gazette, though. The next day, they addressed their error and handled the situation with humor. 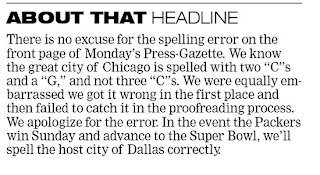 For those living under a rock, the Packers went on to defeat the Bears en route to a Super Bowl victory. In the battle for biggest blunder on a front page, however, Green Bay failed to supplant reigning champion Chicago. After all, it was the Chicago Tribune that declared "Dewey Defeats Truman" in its Nov. 3, 1948, edition. Inaccurately reporting the winner of a presidential election trumps misspelling a city name any day. Sorry, Green Bay.
Posted by Owen at 8:00 AM