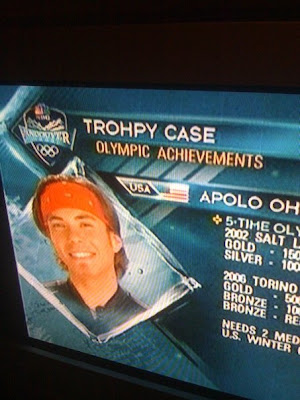 Short-track speed skater Apolo Ohno earned three medals at the 2010 Winter Olympic Games in Vancouver. He was a focal point of NBC's coverage. Had he seen what we see here, Ohno would have exclaimed, "Oh, no!"

Fortunately, Ashley, a Drew Barrymore fan who runs the charming, fun-filled Drewseum website, caught and captured this Olympian "oops" moment and sent it my way. Thanks, Ashley!

NBC has had its share of "must-see TV" over the years, including The Cosby Show, Family Ties (my all-time fave), Cheers, Seinfeld and Friends. Was this must-see TV? Only for those of us on the prowl for spelling errors. Thank you, Peacock Network. (Cue the famous three-note NBC chimes.)
Posted by Owen at 8:00 AM