The Losses Mount for Xavier

It was a rough day for Xavier University. For starters, the men's basketball team lost its first game of the season — in large part because a number of its players were suspended for their roles in an ugly "basket brawl." Then, the school's home city, Cincinnati, lost an n and acquired an unwanted t in the opening sentence of this sports brief. Finally, the school lost a letter from its name. Where's the r in the second-to-last sentence? It looks like part of Xavier has been, ahem, x-ed out. 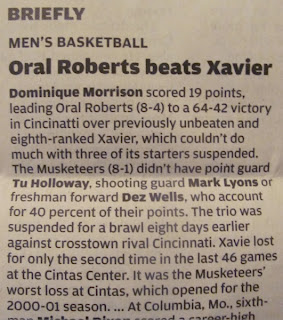