Be True to Your School

Fairfield Warde, my alma mater, is the defending Holiday Classic champion. The Mustangs defeated the Lancers of Notre Dame by three points in the most recent title game. The image you see here appeared on the front page of the Connecticut Post sports section the day after the game. The accompanying caption, much like a Shaquille O'Neal free throw, was no good. 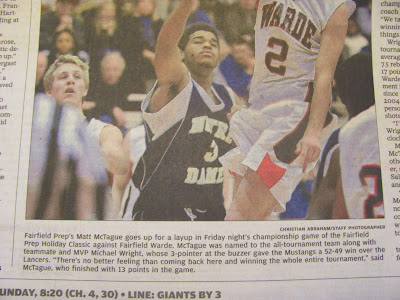 You don't have to be a Fairfield resident or a hoops junkie to realize that No. 2, Matt McTague, is from my school, not from Fairfield Prep. Those five large capital letters across his chest should have warded off any fact errors. And Matt is not attempting a layup against Fairfield Warde. (If he were, he'd be the antithesis of a team player!) He's playing against Notre Dame. Again, a quick glance at the defender's uniform should have provided a clue.

In deference to tournament MVP Michael Wright, the large headline above this photo read, "Wright stuff." Ah, the irony.