Check out the bold keyword in the photo caption. Eraser is used to suggest that Edward Daniel "erases" opposing shots by blocking them. Daniel can erase shots, sure, but by any chance can he erase fact errors as well? One appears in that very caption. 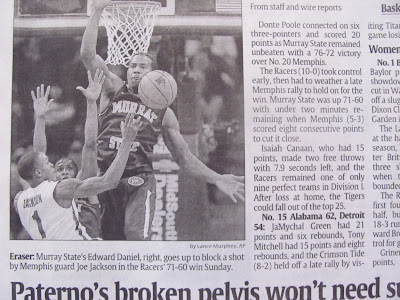 The Racers did not win 71-60, as the caption suggests. If you read the first paragraph of the accompanying story, you'll learn that Murray State won 76-72. The second paragraph notifies us that the Racers led 71-60 with less than two minutes remaining. The caption writer missed the point. Missed 17 of 'em, in fact.
Posted by Owen at 8:00 AM