Remember Roscoe Smith, the supposed All-Big Ten rookie I blogged about back in September 2012? He's in the news again. This time around, his conference affiliation is not the issue — his last name is. 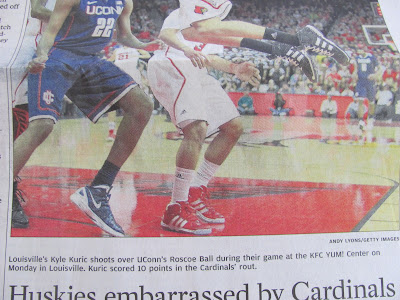 The former University of Connecticut basketball player has the most common surname in the United States, yet the Connecticut Post set the ball rolling by changing it to Ball in this photo caption. That's the way the ball bounces, you might say. I won't accept that. Make like One Times Square each Dec. 31, Connecticut Post, and drop the Ball.
Posted by Owen at 8:00 AM