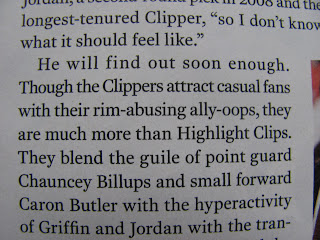 For my readers who are unfamiliar with basketball terminology, an alley-oop is a play in which a leaping player receives a pass while in mid-air and dunks the basketball before landing. A high-flying athlete such as Blake Griffin of the Los Angeles Clippers can figuratively pull off an alley-oop in his sleep. A 5-foot-7-inch blogger such as yours truly can literally pull it off in his sleep, for it is only deep within a REM cycle when I can soar above the rim and perform such aerial acrobatics. In short, being short sucks. But I digress.

My point is, it's an alley-oop, not an ally-oop. Oops!

If you're not sure about a spelling, which was the case with this Sports Illustrated writer, let a dictionary be your ally.