Run Thing Leads to Another 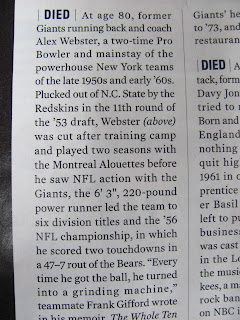 Allow me to run something by you. Take a look at the second sentence — the one beginning with Plucked, on the seventh line. It's about a Giants running back, and it's a giant run-on. The sentence keeps on churning, all the way to Bears on the 19th line. With some tweaking, we can have it up and running again. A simple solution would be to change that comma after Giants to a semicolon or, better still, place a period after Giants and capitalize the.