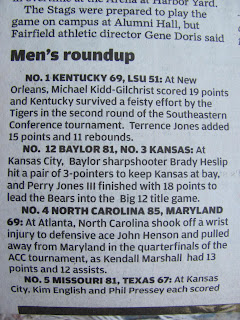 Top-ranked Kentucky, for example, defeated unranked LSU 69-51, and No. 12 Baylor upset third-ranked Kansas 81-[fill in the blank]. Much like The Office sans Steve Carell, something’s missing.

You won’t score any points with your audience, Connecticut Post, if you don’t let the readers know how many points Kansas scored in its Big 12 game. Allow me to get to the points: The Jayhawks had 72, falling by nine in large part because they missed 11 of 13 3-pointers.
Posted by Owen at 8:00 AM