So, readers, did you manage to figure out why I’m down on the Up & Down Words I blogged about on Wednesday? You’ve had two days to solve the word game. That’s plenty of time. So much can be accomplished in 48 hours. God created the day, the night and the sky. A construction company in India erected a 10-story building. The Avengers earned more than $150 million at the box office. John Hughes wrote the screenplay to The Breakfast Club. Surely you had time to discover where Up & Down Words slipped up. 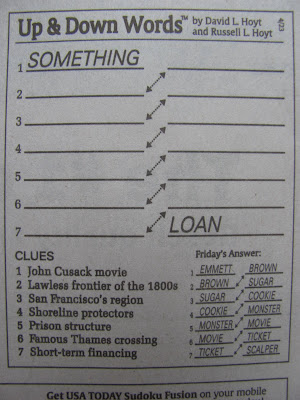 Working from bottom to top, it’s clear the answer to No. 2 is WILD WEST. That makes No. 1 SOMETHING WILD. Hmm… Something’s not right. When it comes to clue No. 1, don’t believe a word of it. Don’t believe two words of it, actually — the first two. Something Wild is a 1986 movie starring Jeff Daniels, not John Cusack. In 1986, Cusack was doing something wild, but it wasn’t Something Wild; he was busy enjoying One Crazy Summer. 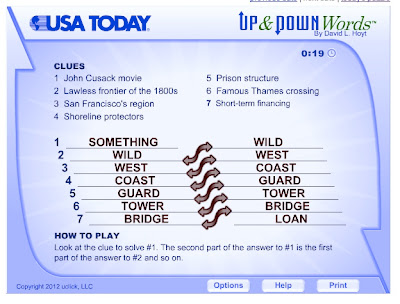