In betting parlance, the point spread (also called the line or the spread) is a handicap placed on the favored team. It’s designed to give both teams (the underdog and the favorite) an equal chance at winning, from a bettor’s perspective. Let’s say, for example, that the LeBron James-led Cleveland Cavaliers are facing the lowly Philadelphia 76ers in a world without point spreads. In that case, almost everyone would bet on Cleveland — and almost everyone would win. The casinos would lose. That’s where the point spread comes into play. An oddsmaker predicts that the Cavaliers will win by x-number of points. (Let’s say 12.) This number is the point spread. Now, it’s not merely a matter of wagering on the Cavaliers to win. If you bet on Cleveland, it has to win by at least 13 points. Margin of victory is now a factor.

You get the point. Anyway, when it comes to point-spread listings, two standard practices exist: The favored team is listed on the left, and the home team is listed in all capital letters. For example, in the point spread pictured below, Utah, playing at home, is an 8-point favorite over visiting Portland. 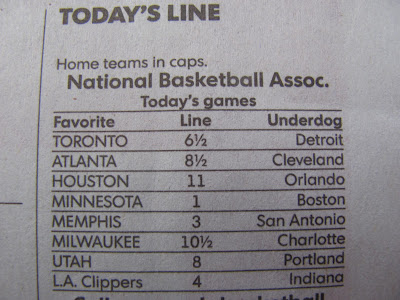 Where, I wonder, are the Clippers playing Indiana? Knock-knock. Is anybody home? Is it a neutral-site game? That could explain the lowercase letters on both sides of the ledger. The game was played at the Staples Center, in Los Angeles, making the Clippers our homeys. As such, Indiana — in point-spread terms — was playing against the L.A. CLIPPERS, not the L.A. Clippers. In Los Angeles, of all places, someone should have been able to raise the necessary capital(s).

Use uppercase letters next time. I bet it’ll help the Clippers feel at home.