You Win Some, You "Loose" Some

The first time I saw the 1999 comedy Office Space, more than a decade ago, I was hooked faster than a Breaking Bad binge-watcher or a recreational golfer’s tee shot. The movie’s beginning is one of the best of all time. Is the opening traffic scene profound? No. Is it relatable? You can read the answer all over my oh face: Oh, yes! Oh, yes! Oh, yes!

Office Space has, ahem, a flair for making me happy. It’s jammed with things I love, from Initech employees going gangster on a printer (@#$%& PC LOAD LETTER!) to the cute Chotchkie’s waitress to Swingline-lovin’ Milton to the badmouthing of a certain “no-talent ass clown.” The face Michael Bolton makes when the “Sounds like somebody’s got a case of the Mondays!” woman greets him during the programming-a-virus scene makes me smile every time.

My smile turns upside down less than 10 minutes later when Tom, a corporate drone at Initech, shows Peter his million-dollar idea, one comparable to the pet rock. Tom’s pet project is a “Jump to Conclusions” mat. “You see, it would be this mat, that you would put on the floor, and it would have different conclusions written on it that you could jump to.” 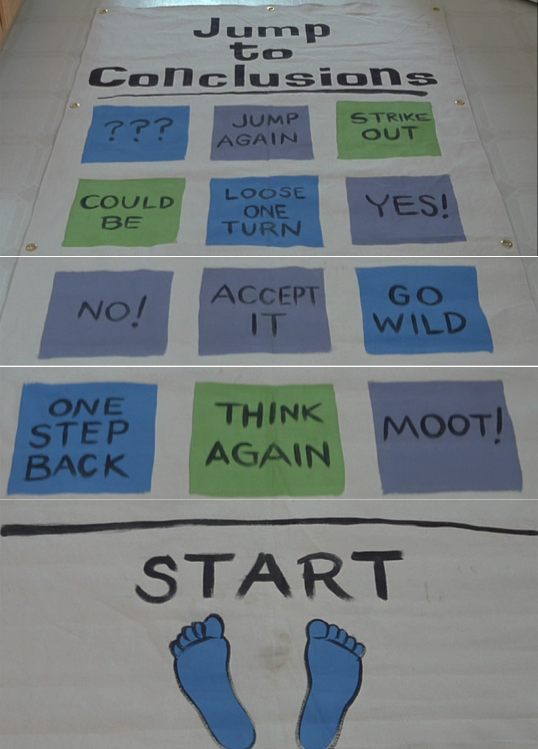 Poor Tom. His idea is flawed, as is his prototype, which has a defect — a loose part.

The middle square in the third row is our jumping-off point. Its first word is loose, which doesn’t fit.

That second o, which is on the loose, literally and figuratively, is an Office Space invader.

Tom’s not alone; he made the same mistake that is epidemic in the comments section of online sports articles. It’s a loose-lose situation with which I’m all too familiar.

Before you lose a tooth, the tooth must be loose.

Is the Office Space mat material a “true” error? That is, was loose used intentionally, as a way to establish Tom’s incompetence, or was it a flub that slipped past the director? Who am I to judge Mike Judge?

All I know for sure is that we need a cover sheet on our TPS reports … and that Tom made use of loose when he should have used lose. He refused to lose, which normally I’d commend. Not this time. If he doesn’t lose it, I’m going to lose it. Just kidding. I’m not a loose cannon.

But seriously, Tom, if you could just go ahead and make sure you do that from now on, that would be great. I know you want to make $1 million, but first you need to make loose change.
Posted by Owen at 8:00 AM