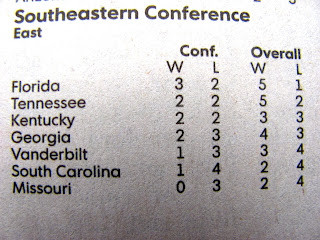 Florida has played six games this season, four in conference and two out of conference. Florida is 5-1 overall and 2-0 in nonconference games. So, to set the record straight, Florida is 3-1 in the SEC.
Posted by Owen at 8:00 AM