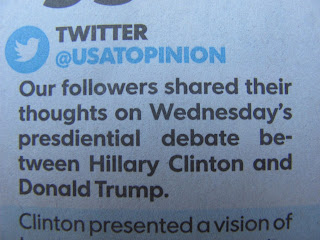 The eighth word in the sentence is dead, or at least die-ing inside, and is not befitting the leader of the free world. Reminiscent of Alec Baldwin and Kate McKinnon in Studio 8H on a Saturday night, it's pretending to be presidential, but it really isn't.
Posted by Owen at 8:00 AM