"If man could be crossed with the cat it would improve man,
but it would deteriorate the cat." – Mark Twain, 1894
Dear Marshmallow,

You weighed less than 5 pounds at the end, Marsh, yet your passing leaves me with the heaviest of hearts.

Today, however, those 18 years are a blur, flashing before me like a shooting star — moving so fast, burning so bright, disappearing too soon.

For myriad reasons, I have been so blue for so long now that I'd need a ladder to be down in the dumps. This morning, though, my life became immeasurably more melancholy. Marsh, my pretty girl with the big, beautiful green eyes, is gone.

The pretty girl who staked her claim to the spot in front of the heating vent on cold Connecticut days. 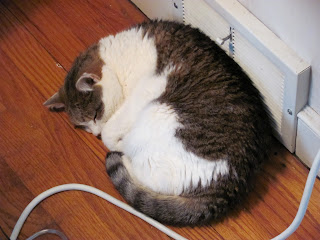 The pretty girl who sought out the sunny spot, whether in the corner of the backyard cat pen or at the foot of the stairs when the light shined through the front door.

The pretty girl who was smart enough to hold her food dish in place with her paw while the silly male cats of the house pushed their plates from one end of the room to the other at mealtime.

The pretty girl who had us laughing the day she left a "special treat" (of the fecal variety) in a pair of slippers.

The pretty girl who awakened Mom each morning with a nose-to-nose greeting, sometimes adding a lick of an eyelid. In return, you'd receive a kiss on the top of the head. I can't begin to count the number of such kisses you received in your 18+ years. You were Mom's girl. You always will be.

The pretty girl who slept in a camel-like position from time to time. It looked so uncomfortable. Today, I am the uncomfortable one.

The pretty girl who was — and who will continue to be — the, shall we say, butt of an inside joke that will live on in perpetuity in our family.

The pretty girl who preferred her meals topped with broken-up pieces of sliced cheese.

The pretty girl who somehow always sensed when Mom was ill and kept her constant company, nestling at her side.

The pretty girl who often felt her human counterparts couldn't get the food out of the can and into her dish fast enough to suit her. You'd meow ... and meow ... and meow. I laughed off the incessant cries because I loved you as you loved me: unconditionally.

The pretty girl who left us for a week a decade ago. Where did you go? I didn't really care. I just hoped and prayed you'd find your way back. When I got the call that you had returned home, I raced across town, heart thumping, to see you. You greeted me at the back door. I picked you up, cradled you in my arms and dropped to the kitchen floor. That moment, seated on the linoleum, with my back propped up against the refrigerator, is imprinted in my mind's eye with the utmost clarity. I will never forget that moment, that feeling. Time spent with you was never wasted.

You asked for nothing, Marsh. Well, nothing more than food, shelter, a clean litter box, some sun and a few other basic necessities. You gave so much, though, whether you realized it or not. You've left an indelible mark on my heart, Marsh. I will miss you so much. 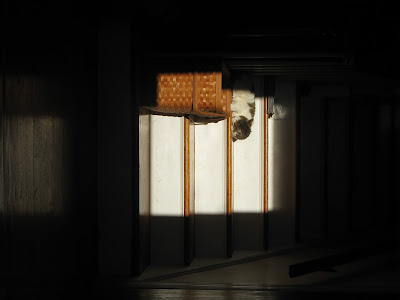