Ironing Out Some Confusion

This post is about a movie that's a few years old, so it's not like I'm striking while the iron is hot, but I couldn't resist using my superpowers for good in another Robert Downey Jr. film.

Remember the 2008 movie Iron Man? I enjoyed it. In fact, it's one of my favorite superhero flicks. It's not perfect, though. Here's why:

About five minutes into the movie, during a video presentation at an awards show in Las Vegas, a Forbes magazine is seen. On the cover is Tony Stark, superbly played by Downey Jr. "Tony Stark takes reigns at 21," the cover blurb proclaims.

Stark reigns at his company, Stark Industries, sure, but he did so by taking the reins at 21. 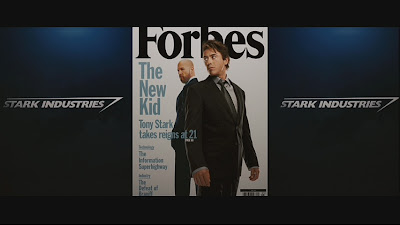 The cover blurb is letting readers know that Stark took controlling power of the company at a young age. In this instance, we need the noun reins. The noun reign refers to royal authority (the reign of King Henry XIII) or the power or influence of one resembling a monarch (the reign of Steve Jobs).

It's an understandable mix-up, but it's one I had to point out. I'm also deducting a few additional points for two other magazine-related errors (not pictured) that pop up during this scene. Both have to do with missing hyphens. I'll let my readers figure out where the missing punctuation marks belong.