For those who are unaware, I live in southwestern Connecticut — in Fairfield, to be exact. It's a picturesque town, situated along Long Island Sound and located less than an hour from the Big Apple. In 2006, Money magazine named it the ninth-best place to live in America. Enough about my hometown. On to today's example of "writing gone wrong." If I had missed this error, it would have reflected poorly on my editing skills. 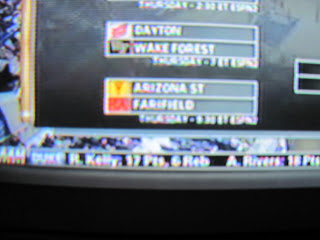 While watching a UConn-Stanford women's college basketball game on ESPNU with my brother, I spotted this misspelling late in the first half. Shame on you, ESPN. Your headquarters are in Bristol, Connecticut, a stone's throw (OK, 50 miles) from Fairfield. I expect you to be able to spell Connecticut towns correctly. To make matters worse, the same graphic popped up again in the second half, and it hadn't been fixed.

You tell me: Does ESPN stand for "Entertainment and Sports Programming Network" or "Extra Spelling Preparation Needed"?
Posted by Owen at 8:00 AM