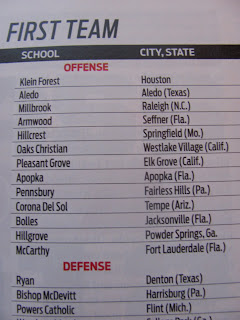 Spelling mistakes and fact errors are the bane of any good editor, naturally, but another source of aggravation, often overlooked, is inconsistency. Allow me to share an example.

I annually purchase the Sporting News college football yearbook, which I flip through so often during the course of the season the pages are dog-eared by the time the final bowl games are upon us. Not just dog-eared, mind you — big, floppy, Beagle-eared. I refer to the University of Florida's team preview on an almost-daily basis from, oh, August to January, which is why I mark that particular page with a Post-it Flag the day I purchase the yearbook. The page that lists the high school All-Americans is also a regular stop, though it will never earn Post-it Flag status. Whenever one of the first- or second-team All-Americans announces that he's going to play for the Gators, I mark it down in my yearbook, unofficially welcoming the youngster to the Gator Nation. (Yes, I have a sickness!) It's here, on this All-American page, where the inconsistency appears. Take a moment and see if you can spot it.

Each player's position, height, weight, school, city and state are listed. The Sporting News editors settled on listing non-familiar cities by putting their states' abbreviations in parentheses. That works for me. What doesn't work is using that format for every city-state listing but one. Look at the second-to-last listing under OFFENSE. There's something rotten in the state of Georgia. Instead of sticking with the established style, the editors left out the parentheses and inserted a comma. That style works too — it is actually the one I would have chosen — but the two styles don't work together. Pick one ... and stick with it. Is that stating the obvious?
Posted by Owen at 8:00 AM