Looks like this Connecticut Post caption writer was having a rough "mourning." He went 4 for 5 in first-sentence comma usage. In baseball, batting .800 would constitute a banner day. In writing? Not so much. 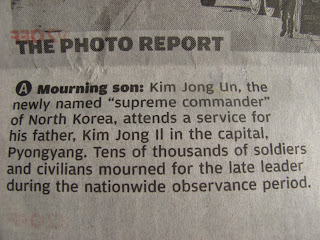 The opening sentence of this caption contains three appositions. (An apposition is a grammatical construction in which a noun or noun phrase is used with an explanatory equivalent.)


1. Kim Jong Un / The newly named "supreme commander" of North Korea
2. His father / Kim Jong Il
3. The capital / Pyongyang
None of these appositions is essential. All three can be eliminated without changing the meaning of the sentence. Don't believe me? Here's how the sentence would look without any appositions:


Kim Jong Un attends a service for his father in the capital.

See, the sentence still works. The appositions were used to provide additional information, but the reader would not have been misled if they were not there. Such appositions are classified as nonrestrictive, or nonessential, and require commas.

Kim Jong Un's father's name can be eliminated without changing the meaning of the sentence because, in the context, only one person could be meant. That one person, however, is Kim Jong Il, not "Kim Jong Il in the capital." A fifth comma needed to be placed after Il.

If you're opposed to the misapplication of appositions, you probably appreciated this appraisal. If you're the opposite, this post has probably left you feeling apathetic. That's appropriate.