Doing It on the Covers

Two weeks later and ... none the wiser. My friend Lindsay, of IAMNOTASTALKER, let me know someone has deflowered another Us Weekly cover. The magazine lost its innocence when it put virgin on its Feb. 25 cover, and it rounded third and slid safely into home again with its March 11 cover. Why, twice in such a short span, has Us Weekly been put to bed with the same erroneous word, which implies that a man has never gotten a woman into bed? 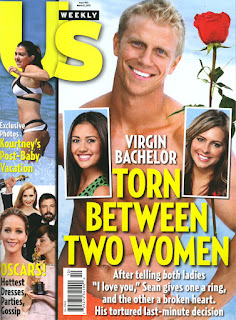 As I pointed out in last Monday’s post, Sean Lowe, the bachelor behind The Bachelor, had sex when he was in college. That was years ago, sure, but it happened, and the past, like a lump on a breast, can’t be ignored. Can a seven-year NFL veteran be named rookie of the year? Can a vintage Star Wars figure be removed from its package and remain mint in box? Can a butterfly shed its wings and be a caterpillar?

Let’s dispense with the questions and cut to the chaste. Sean went all the way back in the day, and his virginity, despite the proclamations of Chandler in a 1996 episode of Friends, can’t grow back. (You can watch a YouTube video — albeit one with a misspelled title — of this scene below.)

Sean narrowed the field to two last Monday. (Poor AshLee!) The season finale of The Bachelor airs a week from today. Tune in, readers, and find out whether Lindsay or Catherine is the lucky lady. The “virgin bachelor” parts with his final rose that night. He parted with his virginity a long time ago.
Posted by Owen at 8:00 AM