This photo caption is not right as rain, and I couldn't lie around and let it go unnoticed. I had to lay it on the line. So, lie back, relax and enjoy today's post — in which I accuse the writer of lying down on the job. 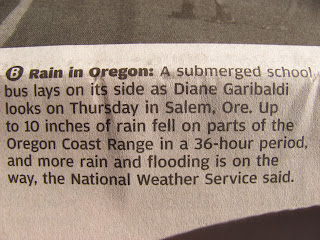 The error, as you've no doubt surmised, lies within the first sentence. A school bus does not lay on its side, at least not in the present tense; it lies on its side.

Getting the lay vs. lie debate straight can be as difficult as licking your own elbow. (Go ahead. Try it. I'll wait.) I won't lie — I sure as heck don't have it down pat. I know that lay indicates putting or setting something down and takes a direct object (ex: Owen is going to lay Jennifer Love Hewitt on the bed) and that lie indicates a state of resting or reclining and does not take a direct object (ex: Owen is going to lie down with Jennifer Love Hewitt after watching the game), but I have to crack open my AP Stylebook to figure out some of the forms of these two troubling verbs, which are as follows:

Here are some examples of each form:

I lie on the couch all day during Back to the Future marathons. I lay the bowl of chips on the coffee table when I need to get up and go to the bathroom.

I lay on the beach for two hours last weekend. I laid a towel on the sand before my two-hour beach nap.

I have lain in the street for long stretches. I have laid down orange cones so oncoming cars don't hit me.

I am lying in the tall grass. The hunter is laying his binoculars down and picking up his rifle.

Not to overstay my welcome, but I should note briefly that lie has another meaning, with another set of verb forms. When lie means to make an untrue statement, its forms are lie, lied, lied and lying.

I lied about telling the 600-pound woman she didn't look fat.

I have lied twice in the previous two sentences.

I'm lying about having lied twice.