It was one year ago yesterday that I shared a story about a party I hosted, one of epic proportions that Rolling Stone described as “a papal conclave meets a spelling bee.” Yes, it was that exciting.

Well, it’s bash time again. Last night I hosted a party here in suburban southwestern Connecticut that was so big it had mimes talking, so exclusive it had NBA star Dwyane Wade offering to legally change his given name to Dwayne to appease the editor host and gain access. Rumors of its grandiosity were as ubiquitous as the red plastic cups in my house last night. The favorable reviews even reached Kim Jong Un, who showed up at the front gate unannounced. He said he heard my party was going to be “hotter than an underground nuclear test site” and requested admittance. My guards, garish in their gold-plated unis, told him he met neither the height nor the heart requirements and sent him on his way … to Dennis Rodman’s house.

Before a visit from Roscoe P. Coltrane, John McClane and Clancy Wiggum put a fuzz finish to the festivities at 3 a.m. (Istanbul time), the party was a cornucopia of teen bacchanal tropes.

The highlight of the evening was the oh-so-popular game called Place the Comma, which I won at last year’s shindig. All 6,731,004 guests participated this time around, and the last four standing were as follows: New York City Mayor Michael Bloomberg, Hell’s Kitchen chef Gordon Ramsay, a TSA screener and me. 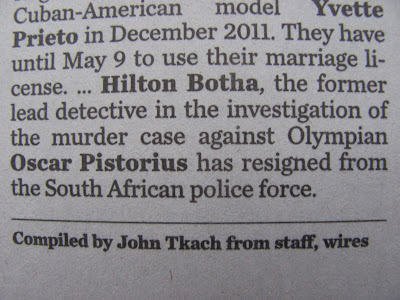 Despite the game’s high stakes, the mayor couldn’t focus. The 2-liter bottles of Dr Pepper distracted him. “Don’t be a Pepper!” he shouted at no one in particular. “More than 16 ounces of Pepper is a sugary assault! Case closed!” he added, while placing his comma after case. Wrong.

While the mayor was distracted, the chef was disgusted. Ramsay complained nonstop about the catering (In-N-Out Burger). His vulgar tirade, replete with British expletives, scared away some of the guests, including Amy Grant and Will Smith. He screamed “Get out!” at anyone with a Double-Double in his hands. He screamed “Get in!” to his comma, sticking it in after Olympian. Wrong.

I had a hunch the TSA screener, an old high school buddy, would be off his game. Earlier in the evening, he had grumbled about the changes to his company’s “Prohibited Items List,” effective April 25. After he had finally committed the guidelines to memory, he told me, they were changing. Plus, he was tired of explaining to friends and family why pocketknives, ski poles and hockey sticks were allowed on board but 3.5 ounces of Listerine or Dannon yogurt was prohibited. His brain on overload, he attempted to put a carry-on comma after African. He failed to get past the security checkpoint. Wrong.

With the game on the line, I recalled last year’s contest and realized this one was shaping up to have a similar ending. I knew “the former lead detective in the investigation of the murder case against Olympian Oscar Pistorius” was a lengthy, preposition-filled phrase providing information about Hilton Botha. I also knew that because this informative phrase, known as an appositive, was not essential to the sentence, it must be set off by commas. Unsheathing my curved punctuation mark — one resembling the carbon-fiber prosthetic limbs the “Blade Runner” made famous at the 2012 Summer Olympics — I placed my comma after Pistorius. Correct. Winner! Two-time champion!

Will anybody take me down at next year’s party, or will I make it a three-peat?